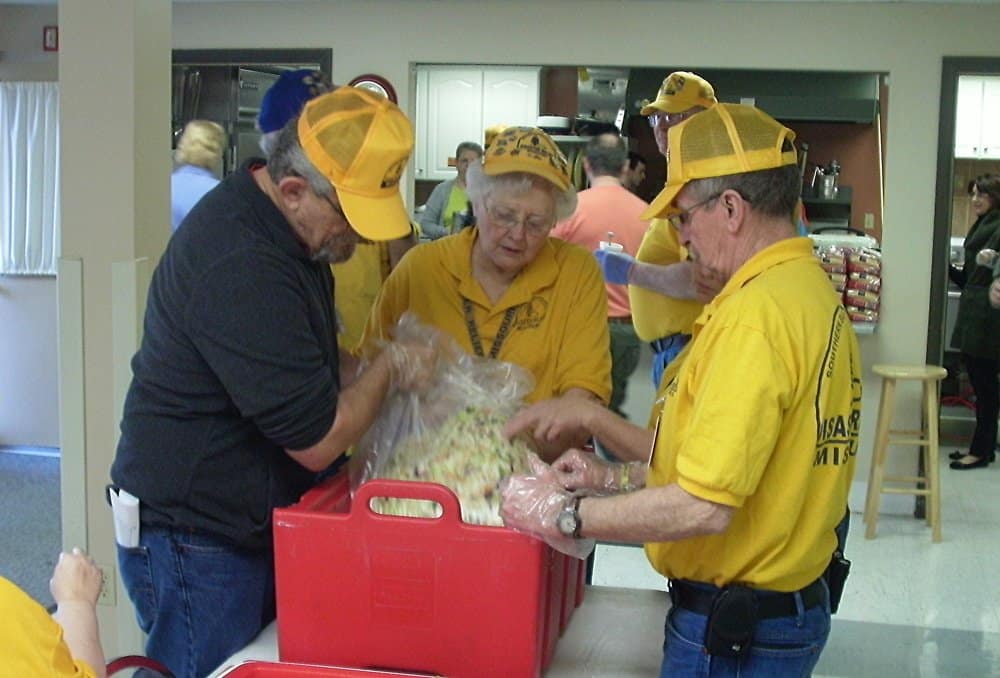 Associate State Director Dave Wells said attendance in the 180s is normal for training. Three other training events are scheduled this year.

Recent disasters – from Hurricane Katrina in 2005 and the 2011 tornado in Joplin to last year’s tornado in Oklahoma and typhoon in the Philippines – have drawn new interest in DR efforts, Wells said.

“DR is the best kept secret of the Southern Baptists,” he said. “We are excited. We love to have more people – especially young people – participate.”

Dudley and Rachelle Newham, both retired Missouri Department of Transportation employees from Mt. Pleasant Baptist Church, Norborne, were among the first-time trainees at the event in Eureka. They came to learn to serve, having benefitted from the service of others.

“We were flooded out of our home in 1993 on the Missouri River,” Dudley said. “Church groups from Texas helped us mud-out. We can relate to someone who has gone through that.”

“We always wanted to do this and we like to be involved,” Rachelle said. “We’ve rededicated our lives.”

Dave Crump, youth pastor at Highland Southern Baptist, Hillsboro, attended the training and brought some of his youth, as well.

“We are called to go out and share the gospel,” Crump said. “What better way than when you are called out for a natural disaster? There was a flood in De Soto, 15 miles from us. There were a lot of places a civilian could not go and help. Here, we could go.”

Jennifer Bellah and Madelyn Perren, both from Crump’s youth group, joined in the training.

“Sometimes the only Jesus people see is the Jesus in you,” Bellah said, explaining that she wants people to see Jesus in her as she participates in DR.

“I really like helping people,” Perren added. Her father, Pastor Keith Perren of Highland Southern Baptist, also trained with DR for the first time in Eureka.

“I wanted to do this for a long time,” he said. “I took a mobile kitchen to Florida after a hurricane because I had a commercial driver’s license.”

Alongside these new DR volunteers, some tried-and-true DR volunteers came to the event to renew their training or to learn new skills.

Dan and Patti Dickerson of First Baptist, Millersville, have trained in several disciplines with DR and have each responded to numerous disasters.

“My first disaster I worked was 9/11, but I trained two years before,” said Patti, who has responded to 16 disasters. She loves helping people, which compels her to continue volunteering with DR.

“You get hooked and you know what you are called to do,” she said. “There are wonderful people you meet on disasters and among DR workers as well.”

Dan, who has worked on the field with DR 24 times, first responded after a hurricane struck Louisiana in 2000. He said that, alongside the ability to help people, DR enables him to serve with “like-minded people.”

“It is bonding with the team and contributing in helping people,” Patricia said, “In a real sense, it’s a joy knowing we are helping.

“I have physical limitations. But when I’m out there serving, I forget about myself and feel better. It’s therapeutic for me.”