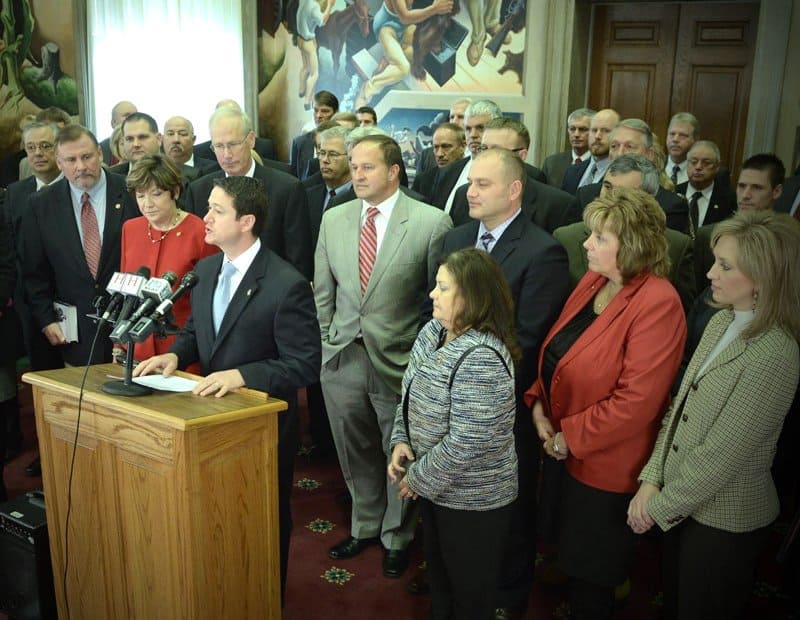 As the Missouri General Assembly approaches its spring break, no less than 28 bills have been introduced in an effort to protect the unborn and health of the mother. Missouri is among the top three states with the most abortion restrictions introduced this year, according to Elizabeth Nash, the state policy director for the Guttmacher Institute, an abortion rights and research group. Such activity bears witness to the prayer warriors and pro-life activists determined to make abortions rare (perhaps abolished) in Missouri.

In just the last decade alone, Missouri lawmakers have passed more than a half dozen pro-life bills. The results are obvious: Abortions in Missouri have dropped from 21,671 in 1980 to 9,234 in 2011, according to the latest statistics from the Missouri Department of Health. Earlier this month the Planned Parenthood clinic in Columbia quietly announced that it no longer had a license to do abortions and were only offering referrals, leaving Missouri with only one abortion clinic – the Planned Parenthood facility in St. Louis, which does about 6,000 abortions a year. A decade ago the state had a half dozen or so such facilities.

Praise God the trend is continuing. We should be thankful for leadership like that of State Senate Majority Floor Leader Ron Richard, R-Joplin. He is steering a bill – sponsored by State Sen. David Sater, R-Cassville – through the chamber that would extend the mandatory waiting period before an abortion from 24 to 72 hours. Not surprisingly Democrats mounted a filibuster designed to kill the bill.

“I’m for life, not death,” Richard said, noting he is willing to apply a rarely used procedural maneuver in order to overpower the Democrat filibuster and force a floor vote on the bill. Such direct talk and bold action is refreshing given the all too frequent vague explanations. It is in stark contrast to the bomb-throwing characterizations used by abortion supporters. Consider this one by Rep. Stacey Newman, D-St. Louis, lambasting pro-lifers: “If you’re a woman and you need some kind of reproductive care, particularly an abortion, you are just thought of as scum.” No pro-life Christian I know thinks of pregnant women as “scum” and Newman’s rant pretty much sums up the attitude and behavior of the nine Democrats in the Missouri Senate. (You haven’t seen anything yet. Just wait until the homosexual activists come forth with their demands.) What is disappointing is how the Republican majority seemingly shrugs its shoulders over such smears in the name of collegiality. It is one thing to have that kind of spirit when debating roads and sewers, but the right to life is non-negotiable and must never be sacrificed on the altar of collegiality.

Meanwhile, in the state House, the bill, sponsored by state Rep. Kevin Elmer, R-Nixa, passed a first round vote, 115-37. The bill even garnered a handful of votes from rural Democrats, demonstrating how powerful the pro-life caucus can be. We should be thankful for Elmer’s leadership and all those who voted for life, not death. In the end, I believe the bill will pass. Gov. Jay Nixon will likely veto and be overridden in September (he might not sign it and let it automatically become law).

More than a dozen pro-life bills have been introduced in the House under the strong leadership of House Speaker Tim Jones, R-Eureka. Jones is one of the strongest pro-life Speakers Missouri has ever had. The House bills range from increased financial documentation and strengthened ultrasound requirements to increased penalties and requirements for greater medical malpractice coverage. Another bill debated in the House would require notifying both custodial parents before a minor can have an abortion. Presently, only one parent must be notified.

One of the arguments used by pro-choice lawmakers is that pro-life legislation is anti-woman because it could impact needed health care. State Sen. Wayne Wallingford, R-Cape Girardeau, smashes such arguments with his new bill that would quadruple the number of inspections required for abortion providers from once each year to four times. “We want to make sure that the women’s health is not in danger,” Wallingford said. Wise advice considering the recent horror stories that have been in the news concerning the filthy, unsafe environments where too many abortions occur.

When it comes to the pro-life issue, Missourians ought to be proud of their General Assembly. Most of our lawmakers seek to honor God through their pro-life action. They ought to be cheered and elected for any public office they seek. Meanwhile, our great and gracious God gets all the honor and glory. It is in His high and holy name that we continue to work and pray as we trust in Him alone for the results according to His will.