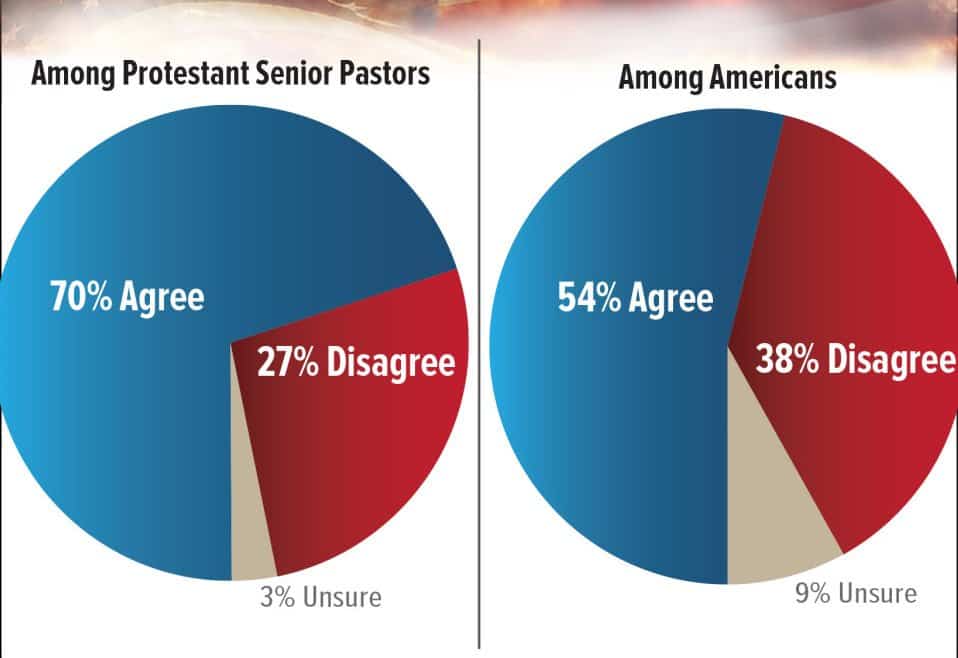 NASHVILLE, Tenn. – Americans have always had mixed feelings about religious liberty. Most say it’s important, but they don’t always agree how much liberty is enough or too much.

That’s the issue at the heart of the upcoming Supreme Court hearings between Hobby Lobby and the Obama Administration over the Health and Human Services (HHS) contraceptive mandate.

It’s a dispute that is unlikely to go away, no matter what the Supreme Court decides.

American preachers, it turns out, are more than a bit uneasy about religious liberty these days.

A survey from Nashville-based LifeWay Research found seven out of 10 senior pastors at Protestant churches say religious liberty is on the decline in America. About seven in 10 also say Christians have lost or are losing the culture war. The telephone survey of Protestant senior pastors was taken Sept. 4-19, 2013.

Seventy percent agree with the statement, “Religious liberty is on the decline in America.” Twenty-seven percent disagree. Self-identified evangelical pastors (81 percent) are more likely to agree than mainline pastors (47 percent).

Researchers also asked pastors to respond to this question: “Many Christian leaders have talked about society being in a culture war. Regardless of how you feel about that terminology, how would you explain the current situation?”

Evangelical pastors (79 percent) are more likely than mainline pastors (60 percent) to say Christians are losing or have lost the culture war.

Some of the unease about religious liberty is due to shifts in American culture and church practice, said Ed Stetzer, president of LifeWay Research.

In the 1960s, nearly two-thirds of Americans were Protestants. Today, they make up less than half of the population, according to the General Social Survey.

In the past, he says, Christians – and Protestants in particular – took it for granted that Americans would look to the church for guidance on moral issues. Churches, he said, were seen as being good for society and so they were given special privileges – like exemptions from taxes and other laws. “Even if people did not go to church, they looked to the church,” explained Stetzer.

That’s no longer the case, as the government and culture no longer defer to Protestant Christians, which makes pastors and their congregations nervous.

“They feel like in some ways there was a pact made at the founding of the country – between God and America,” he said. “That pact has been broken.”

“The fact that ‘Christian’ is not just a demographic category can have a positive side,” Stetzer said, as it means that Protestants and other Christians have to be more active in living out their faith.

But it also has political and social consequences, as a sizable number of Protestants and other Christians run into conflicts with societal norms on issues like sexuality and marriage and other issues.

So Stetzer says Protestants (and like-minded religious people) have to think through a new strategy that defends their religious liberty but also acknowledges that conflict.

Several recent court battles also may play a role, said Thomas Kidd, professor of history at Baylor University, and author of God of Liberty: A Religious History of the American Revolution.

Kidd points to the Hobby Lobby case as well as the Supreme Court’s 2012 Hosanna-Tabor ruling. Both involve disputes between the government and religious groups over exemptions from federal law.

In both cases, religious liberty was seen as less important than other issues – like nondiscrimination or healthcare, said Kidd.

“There’s a real sense that something has changed dramatically,” he said. “Some questions about the meaning of religious liberty are now in play.”

Those court battles, as well as the decline in Protestant cultural power, make pastors nervous, he said. “Less clout plus more aggressive policy creates a sense of crisis,” he said.

More than half (54 percent) agree with the statement, “Religious liberty is on the decline in America.” About four in 10 (38 percent) disagree.

Half (50 percent) also agree with the statement: “Christians increasingly are confronted by intolerance in America today.” Thirty nine percent disagree.

Researchers also found about a third of Americans (34 percent) say Christians complain too much about how they are treated.

“Half of Americans say that religious liberty is on the decline,” he said. “That’s a lot of people.”

McConnell thinks many of the new freedoms Americans want are less compatible with religion. Freedoms always have limits, he said, and Americans disagree about how to weigh religious liberty against other concerns.

“It’s not that people don’t care about religious liberty,” he said. “It’s that other values are seen as more important.”