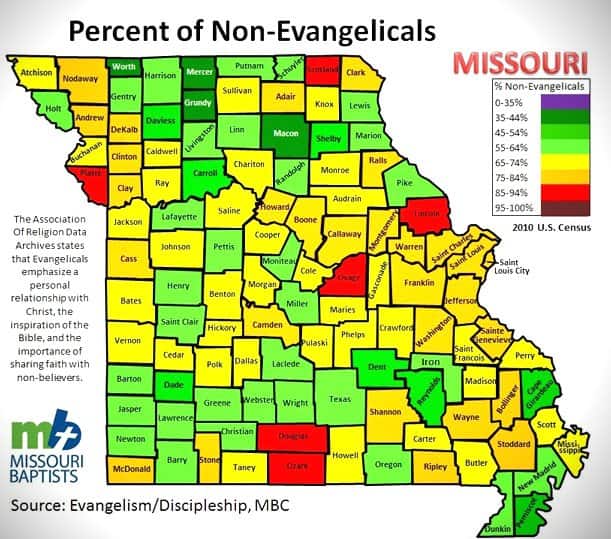 JEFFERSON CITY – Two maps posted on the Missouri Baptist Convention’s (MBC) website reveal that nearly 50 percent of the lost in Missouri live in only seven counties.

According to the 2010 U.S. Census, 4.5 million people out of the state’s total population of 6 million do not claim to be born again. In 2013, the North American Mission Board (NAMB) created a report “that weighted lostness in each Missouri county based on population.” Mark Snowden, MBC evangelism/discipleship strategist, used this information to create the maps, which can be accessed from www.mobaptist.org/evangelism/demographics. This website also contains one-page reports about each county.

Five of these counties – St. Louis County/City, St. Charles, Jefferson and Clay – have non-evangelical populations above 75 percent. As such, relatively few residents in these counties are seeking to bring the lost to Christ.

But spiritual lostness also exists in unexpected corners of Missouri, far from the city. For example, according to one map, Scotland County is estimated to have less than 5,999 lost people. But only 4,843 people actually live in the county, and more than 85 percent of them claimed to be non-evangelical in 2010.

Snowden encouraged Missouri Baptists to use the maps as they seek to distribute God’s Word and practice servant evangelism in conjunction with the MBC’s “Light Up Missouri” initiative.

Churches can find ideas for shining the light of the gospel around Missouri online at www.mobaptist.org/light. On the web page, servant evangelism ideas come in three categories:

• Days of Service, like donating canned goods to a food pantry or hosting a BBQ for firefighters, police officers or city maintenance crews.

• Seasons of Service, like helping immigrants in the area adjust to life in the United States.

• Moments of Service, like inviting a friend to do a service project with you so that you can build the relationship and witness him or her.