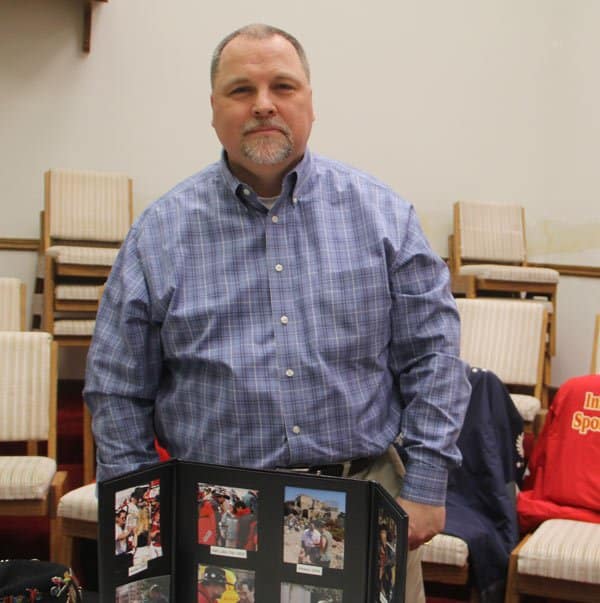 FLORISSANT – The Olympic Games are a great meeting place for the people of the world, and Jeff Wells, senior pastor of Cross Keys Baptist Church here, believes it is a wonderful place to introduce them to Jesus. He is ready for his trip to Sochi, Russia.

“The Olympics are Acts 1:8 all in one place,” Wells said. “People attend from all over the world, and I love to tell them about Jesus.”

Wells tells the story about meeting two guys at the swimming venue in Beijing in 2008. “We started talking to them and found out they were from Black Jack, Mo., which is less than five miles from my church (Cross Keys).”

Wells began attending the Olympics in 2000. “I met David Guinn at a college retreat,” Wells said, “and he invited me to go with him to Sydney.”

Guinn founded Action Ministries International (AMI). The ministry organizes a team of sports chaplains to go to each of the Olympics to share the gospel. Each chaplain is equipped with a supply of “Jesus pins” and an identifiable jacket.

Wells took Guinn up on the offer to go to Sydney, and he has since attended eight Olympics. “We give away the Jesus pins as a free gift,” he said. “Trading pins is a big activity at the Olympics, and these pins feature the colors of the gospel, black for sin and red for the blood of Jesus. They are a great conversation starter and lead-in to talk about Jesus.”

The cost to Wells for attending the Olympics every two years is about $8,000 for each trip. This includes the flight, meals and money for AMI to produce the items needed for ministering.

“God has always provided what I needed for these trips. Several churches, groups and individuals have donated for my ministry,” Wells said. “In 2006, the day before I was to leave for Torino, a member of my church came by with a book for me to read on the trip. After he left, I looked in the book, and I found an envelope with $300. I thought there must be a reason I needed the money. When we got to Torino and sought out the location of the TODAY Show, we had an opportunity to get tickets to the opening ceremonies. The face value of those tickets runs $1,200, but these tickets were $300.”

According to Wells, the restrictions since September 11th have made it difficult to get into Olympic Park. “Being in the venue is key,” he said. “We get a ticket for an event and go with the intention of making a day of it to make the most of the opportunity to talk with as many people as possible. AMI has a guy who works on getting tickets to the events to give us when we arrive. It doesn’t matter what event it is because there are always lots of people to talk with about Jesus.”

When Wells was in Beijing, he had a special call by God. “Part of my leadership responsibilities,” he said, “was to travel the subway and pick up folks at the airport and guide them back to where we were staying. As I rode each day, I saw young girls and older women riding the subway. God said, ‘These are the fortunate ones.’ I knew He was leading my family to adopt. When I returned home, I discussed it with my wife and my daughter, Bethany. After praying, we adopted Joy Lee from China.”

Baptist Secretaries & Administrative Assistants of Missouri (BSAAM) will hold their annual meeting on September 19-20, 2022 at First Baptist Church, Lake St. Louis. The event begins with registration at 8:30 am on Monday and closes at 3:30 pm on Tuesday.