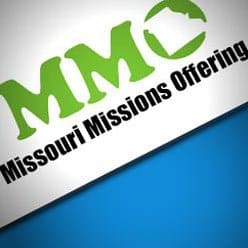 JEFFERSON CITY – Missouri Baptists dug deep and gave generously in 2013 to the Rheubin L. South Missouri Missions Offering (MMO). As a result, they surpassed the MMO goal for the second straight year.

“Thank you, Missouri Baptists,” said John Yeats, executive director of the Missouri Baptist Convention. “Your faithfulness in stewardship and your sacrificial giving impact lives for Christ throughout our state.”

MMO-funded projects complement Cooperative Program ministries but are not fully funded by CP. In this respect, MMO helps Missouri Baptists roll up their sleeves and become personally engaged in making disciples.

Examples of MMO projects funded for 2014 include:

• The Missouri Baptist Children’s Home, which receives 17 percent of the offering

• And associational partnerships; 10 percent of the offering from each of the state’s 61 associations is sent back to that association.

“Without MMO, these vital projects that advance the kingdom of God in Missouri would be severely limited,” said Yeats. “Thanks to the generous financial support of Missouri Baptists, these ministries are strengthened.”

About 780 Missouri Baptist churches participated in MMO in 2013.

Missouri Baptists have approved a 2014 MMO goal of $700,000. The MBC will announce the 2014 theme and provide churches with MMO resources this summer.