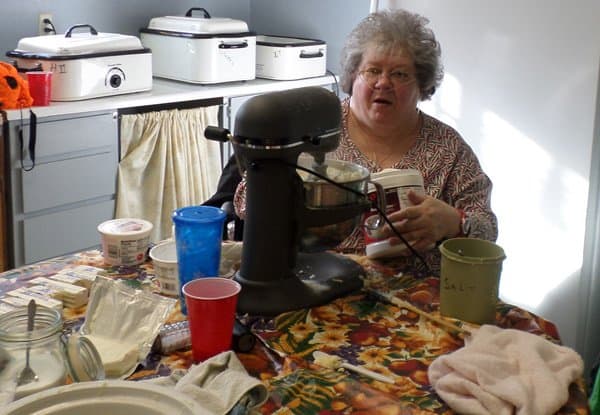 Trenton – Volunteers provide hundreds of meals for Grundy County area residents at Coon Creek Baptist Church every Thanksgiving Day. Elnora Knapp makes the mashed potatoes for the meals. Knapp received the first telephone call about two turkeys being donated to the church and that was the impetus for starting the annual event.

TRENTON – It is not uncommon for a church to have a Thanksgiving meal and even send some carry-out meals back to the homes of some of the older folks in the church. But Coon Creek Baptist near Trenton pulled out all the stops and seemingly fed nearly their entire county on Thanksgiving Day.

Coon Creek is actually Union Baptist Church, according to the official documents, but everyone in western Grundy County calls it Coon Creek because of its proximity to, well, Coon Creek. They do things their own way here.

This past Thanksgiving they fed nearly a thousand people a turkey dinner with noodles, pie and all the trimmings on Thanksgiving morning. A church of about 75 attenders hosted over 430 in their fellowship hall and sent out 575 carry-out meals to seniors, to those alone and to jail inmates. They don’t want anyone to go through Thanksgiving without a homemade turkey dinner.

In 1995 Coon Creek members Mike and Sherry Knapp were hosting a Bible study in their home. Henry Blackaby’s “Experiencing God” study prompted the question: “What is one thing you would not want to give up in your life?”

Many in the group said “Having Thanksgiving meal with my family.” Just about then the phone rang in the Knapp house.

A lady was calling saying she had two extra turkeys, if the church could “use them to provide for a Thanksgiving meal for someone.” It was one of those “God moments” Blackaby talks about. The group felt God was leading them to spend their Thanksgiving morning taking turkey dinners to a few of the needy people in the congregation.

Mike Knapp’s mother, Elinore, coordinated the effort that first year. Eighteen years later, she’s still directing the Thanksgiving morning project which now involves about 50 volunteers taking the food all over Grundy County as well as feeding over 400 at the church. Part of the crew cooks for a couple of days prior to Thanksgiving.

The delivery routes are planned and people start taking the hot meals out about mid-morning on Thanksgiving. They spend a little time with the seniors and talk to them a while.

A meal recipient, Delores Lopez, said, “It has a homemade taste, like grandmother used to make. I am disabled, and because of the church’s generosity in delivering I am able to enjoy a Thanksgiving meal at home.”

Coon Creek Pastor Doug Crawford said, “No one here seeks any self-recognition, but we do this to help meet the needs of those who perhaps would not have a Thanksgiving otherwise.”

Another senior, Bonnie Thomas, has received meals for several years and said, “The meals are really good. By the church delivering these meals, I am able to enjoy Thanksgiving with my grandkids at home which I could not cook myself.”

Pastor Crawford said they love to share the love of God with their neighbors in the Edinburg neighborhood of western Grundy County. “While we would love to see people come to know Christ through this outreach, in some ways it is more about people stepping up and giving up a special day like Thanksgiving in a willing way to serve others. That’s what discipleship is all about, learning to serve.”

“People say to us, ‘I don’t know how you do this,’” he added, “and they get standard answer from those involved, ‘We don’t either. It’s Christ in us that strengthens us to get it done.’”

Dianna Crawford, wife of the pastor, said, “We have a lady, Ida Lee Little, who has stepped up and helped with the meal for many years. She is 82 years old. Two years ago Ida Lee’s whole family came back to Coon Creek to help out with the effort as a family project.”

The irony of the situation is that Coon Creek Church is a little off the beaten path. In fact, it is at the end of a gravel road. But for a country church with a bi-vocational pastor who works in a radiator plant shipping department, they are doing just fine.

“When you come to the end of the road, there is no better place to be than where God is,” said Pastor Crawford.

The people running the 25 delivery routes, the 430 eating turkey dinners in the gymnasium and the jail inmates, senior adults and lonesome people receiving the dinners all agree. God is there, and He is represented well by the people and the love that brought them a Thanksgiving dinner.