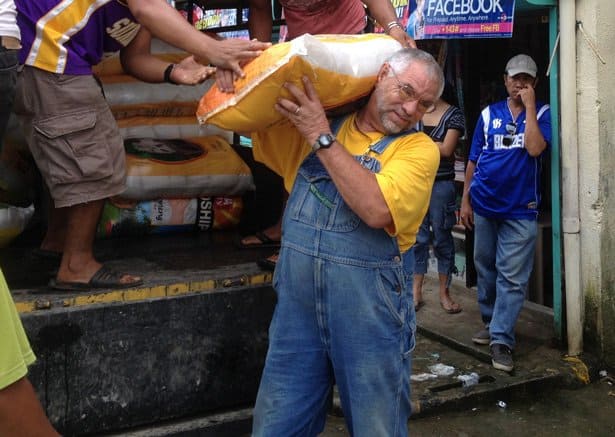 What changed Carter’s mind was his recent trip to the Philippines in response to Typhoon Haiyan. Carter saw firsthand the legacy of the Lottie Moon Christmas Offering for International Missions in a time of crisis.

“I can’t even explain it,” he said. “You see these men and women who give everything to their people and the only way it’s happening is because of our giving at Christmas. It lets our American missionaries contract with nationals and they’re the ones best able to do the actual hands on ministry in churches and homes. Lottie Moon helped us make these connections which are helping us now in the recovery.”

English is fairly commonly spoken in the Philippines, but the Lottie Moon Offering legacy meant there were translators immediately ready who had worked with Southern Baptists when Carter needed one.

“The van that I rode around in said right on the side of it, ‘Sponsored by the International Mission Board’ – right on the side,” he said. “That’s Lottie Moon. It’s part of life-skills projects and agricultural projects. It’s amazing.”

The nationwide goal is $175 million, the same as last year’s. 2012 was a down year in Missouri Baptists’ giving to Lottie Moon, falling short of the $3.75 million goal while giving $3,315,805.80 toward the national total of $149.3 million. Every penny of the offering goes to the International Mission Board’s (IMB) overseas budget, thus supporting our missionaries and their work, which can include responses to disasters. Lottie Moon funds represent 53 percent of the IMB’s budget, the rest coming from the Cooperative Program and other gifts.