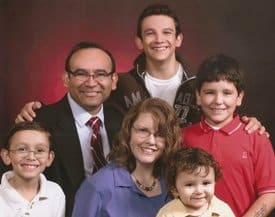 KANSAS CITY – Church planter Luis Mendoza didn’t know he was a church planter when he started doing it more than 20 years ago. A new believer, in the late 1980s, Mendoza thought building relationships with non-Christians, sharing Christ and starting up new Bible studies was just what Christians did.

“I became a believer in 1989 when I came here to this country,” said Mendoza, a North American Mission Board (NAMB) church planter now in Kansas City. “Immediately I was licensed to preach the gospel. I was connected to Mauricio Vargas at the Missouri Baptist Convention and that’s how I began. I was just visiting people, gathering people and starting Bible studies.”

And – two decades later – he is still doing it.

Mendoza pastors a Spanish-speaking church he started nine years ago in Kansas City. He also helps lead a church plant in the Kansas City suburb of Independence.

Mendoza and other leaders who have been part of the planning for the center are currently building relationships with neighbors in the hopes that new ethnic churches – among the many unreached people groups nearby – will form soon.

“We have to first discover the different people groups represented,” Mendoza said. “We have some data. We have some statistics, but it is one thing to have the data available and another thing to go out and meet people and see where they are coming from and what their situation is. So we’re trying to go out and build relationships and share the gospel with people.”

Mendoza’s congregation first began to explore this option after struggling with an extended search for a place to relocate. After one particular time of prayer during the location search, a church member proposed a troubling thought to Mendoza: “Pastor, I think we’re praying in a way that may not be pleasing God. We’re asking God to provide a location for us, but we’re pretty much telling Him where we want to go.”

That’s when the lady suggested the possibility of northeast Kansas City, one of the most diverse locations in the city.

“God expanded our mind,” Mendoza said. “God expanded our vision. This isn’t necessarily about finding a good place for a Hispanic church. It’s about the possibility of reaching out to all the different people groups represented in this community. I think from that moment on God began to open our eyes to see that we needed to reach more than just Hispanics.”

Mendoza acknowledges that cross-cultural ministry can be tough. Even though the center’s leadership team includes a variety of ethnicities, he knows it’s likely that some of the people groups that need new churches in the area won’t be represented among the leaders. That means language problems may make the work slower.

The move also meant sacrifices for Mendoza’s church since most of its members didn’t live near the new location.

Yet, regardless of the struggles, Mendoza believes the work of the new center is critical. Mendoza notes that ethnic church members often have a common experience with immigrants from other cultures. His church will be able to build evangelistic bridges across that shared experience. He noted his own family’s growing relationships with Iraqis through friendships his children have at school.

Mendoza also expressed hope that, after reaching non-Christians immigrants with the gospel, those new believers may go back to their homelands with the gospel and share it in places where missionaries can’t go.

Kansas City is one of 32 Send North America cities where NAMB is focusing specific church planting and evangelistic work. The Send North America: Kansas City area is home to three Southern Baptist associations in two state conventions. There is currently one Southern Baptist Convention church for every 7,662 people in that area. The population of those nine counties is about 1.9 million.

Cold rain and dark skies loomed over the highway shortly before 7 p.m. on Nov. 15, 2012. James Wilson was driving home from a hunting trip with his son when, suddenly, a drunk driver hit him head on.