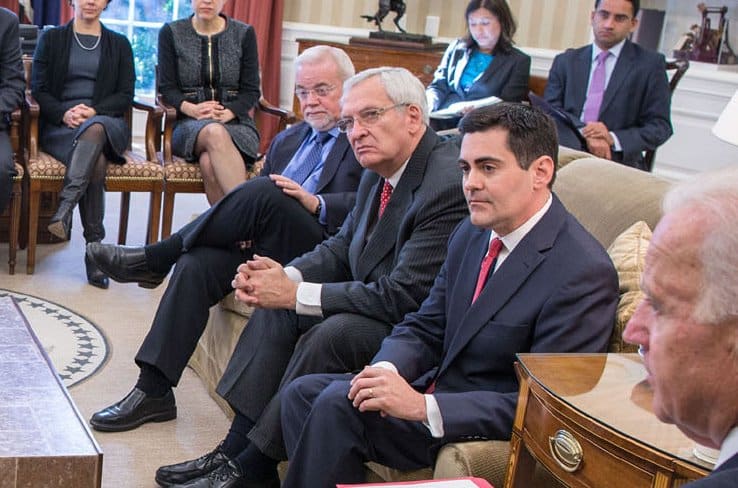 WASHINGTON (BP) – A new, more conservative generation of evangelical Christians should engage politics, not retreat from it, because of the gospel of Jesus, Southern Baptist Ethicist Russell D. Moore says in the latest issue of First Things.

Writing in the influential journal, the president of the Ethics & Religious Liberty Commission says the apparent return to a confessional, gospel-centered faith among evangelicals – which he describes as “good news” – should not result in political and social disengagement. Otherwise, young evangelicals will be in danger of duplicating the “politically idolatrous” mistakes of previous generations but in a different way, Moore says.

Instead, gospel-centeredness “demands a certain form of public engagement,” he writes, noting that the announcement of God’s salvation through the work of the Lord Jesus “cannot help but have political consequences, if for no other reason than in its explanation of what sin is.”

Baptist and Presbyterian churches of the last two centuries in the South were not “apolitical” when they failed to call sinners to repent for owning slaves and lynching African Americans, Moore writes. Neither will today’s churches be “apolitical” if they fail to engage the issues, he says.

“A church in 21st century America that doesn’t address the horror of abortion or the public denial of marriage is a church that says to Jesus, as others have said before, ‘Who then is my neighbor?’ This church also keeps from guilty consciences the only thing that can liberate them: the direct confrontation with the gospel of a God who is both just and justifier,” Moore writes. “We cannot in our attempt to keep the gospel from being too big present a gospel that is too small to, as the Great Commission puts it, teach the nations ‘whatsoever I have commanded you.’”

In the essay, titled “Why Evangelicals Retreat,” Moore says the secular culture “will ensure that Christianity must either capitulate or engage.”

Engagement will begin in churches, he says.

“An Evangelical who is leading more than an online presence but an actual church must equip people to testify to the whole counsel of God about what a person is, what makes for human flourishing, what the goal of sexuality is, and so on,” Moore writes.

The ongoing sexual revolution assures evangelicals can no longer pretend “real America” is like them, Moore says.

“As orthodox Christianity becomes increasingly freakish in American society – as it is in Europe and in the Islamic world – the more the church will have to look to the New Jerusalem and the less we will be able to look to Mayberry for our picture of what ‘normal’ looks like,” he says.

That freakishness will mean evangelicals will be viewed less as another constituency for either political party. “This could give the sort of prophetic distance that enables Christians to speak in the public arena but with a primary focus on the church as the colony of the kingdom of God, not on America as some sort of mythical new Israel with a covenant mandate to bless the nations,” Moore writes.

This new reality demands evangelicals live “in the tension of prophetic distance and prophetic engagement,” he says. “Prophetic distance in that we don’t become mascots for any political faction, adding Bible verses to justify somebody’s agenda when called upon to do so. Prophetic engagement in that we understand that the gospel speaks to the whole of reality, including the decisions we make together in civil society and statecraft.”

The impulse of today’s younger evangelicals to flee from what are considered political issues is not “a move to the political left as much as a move to the theological right,” Moore writes. They have observed a previous generation of evangelical engagement that was often less than prophetic in publishing voters’ guides on such questionable issues as a line-item veto and in welcoming into the fold as Christians “Mormon talk show hosts and serially monogamous casino-magnate reality TV stars,” he says.

“Evangelicals want to conserve a supernatural gospel without sacrificing its social, cultural, and political importance, a gospel they saw often negotiated away in previous generations in a ploy for social and cultural acceptability and political success,” Moore writes.

Younger evangelicals’ interest in a wider range of issues – such as care for orphans, environmental stewardship and human slavery – than the typical culture war issues often strengthens their social conservatism, he says.

“Even those squeamish about culture-warring still want to be culture-making and culture-preserving – and culture-changing,” Moore writes.

The evangelicalism of this new generation is theologically “to the right of the old religious right,” Moore asserts.

The new type of evangelical church differs from the normal Bible Belt church of the previous century, he says. It has stronger requirements for membership, practices church discipline and hears expositional sermons that are 45 to 60 minutes in length from a pastor who is pro-life and pro-marriage.

“This pastor and his leadership may want to retain Christianity in its fullest, but they are not sure how, or whether, public engagement fits with the mission of the church, but not because he’s theologically liberal,” Moore writes.

“The question is, how does one carry out the things Jesus has commanded us to do (evangelize, baptize, disciple) without confusing them with the illusory immediacy of the priorities of this present age?”