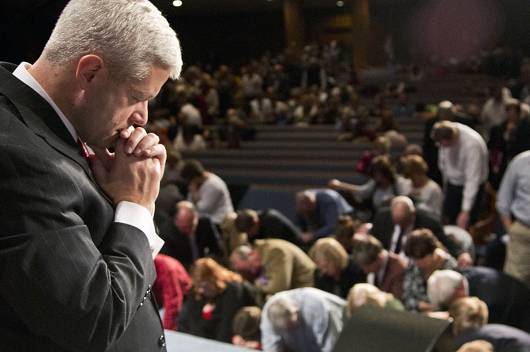 RICHMOND, Va. (BP) – John* had his comfortable American life all arranged. Moving up the corporate ladder, he was successful in a plywood company and looked forward to his next opportunity.

“I planned on being somebody,” John said. “Money and recognition were my main motives for getting up every day.”

But when he spoke to a missionary appointment service Nov. 10, he had a different story to tell.

“I was planning on making a name for myself in the corporate world,” John recalled. “But God showed me … that it was His name that really mattered.”

John and his wife Anna*, who will work in Central Asia, were among 68 new IMB missionaries appointed during a service at Hickory Grove Baptist Church in Charlotte, N.C.

For Max* and Lucy* from San Angelo, Texas, heading to the mission field in East Asia also means leaving behind a comfortable lifestyle afforded by a civil engineer’s salary.

They said they are now ready to pick up God’s vision for the nations. “We serve an amazing God who’s willing to use ordinary people to bring glory to His name,” Lucy said.

Through tears, another new missionary, Sherry*, told how God broke her heart for women trapped behind the veil of Islam when she was a journeyman (two-year service term). Her husband James*, a university administrator from Rome, Ga., has joined his passion with hers to reach the people of North Africa and the Middle East.

IMB President Tom Elliff joined the missionaries’ tears, joking he was the one IMB hired to come to these meetings and cry.

“I started [crying] when I walked in looking into the faces of these new missionaries who will go soon to the very ends of the earth,” Elliff said. “And I probably won’t stop until I get back to the hotel tonight, if then.”

As he preached from 2 Tim. 1:8-12, Elliff praised the willingness of the appointees to reject the idea of a “suffering-less brand of Christian faith.” Quoting the apostle Paul, Elliff said the new missionaries could expect hardships, but they would never be sorry they made the choice to face the darkness.

“This road you have chosen leads to an intimacy with Christ that can only come through faith,” he said.

Elliff also encouraged the new missionaries by emphasizing God’s promises throughout Scripture: “He can handle anything you bring Him.”

His words weren’t reserved for the new missionaries, however. He spoke to those gathered in the church auditorium to look for their own calling – to pray, to give their blessings to those who are going, to give sacrificially to support the work. Inviting people to pray at the close of the service, Elliff asked those in attendance to commit to embrace the next thing God showed them about missions.

As the crowd gathered at the front of the church to pray, Elliff voiced a prayer that hearts would be joined in reaching the darkness, no matter the cost.