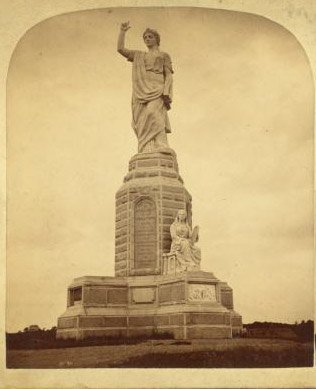 WASHINGTON (Christian Newswire) — The first monument erected to honor America’s Christian foundation is the National Monument to the Forefathers, and it is the original Statue of Liberty. But now it is not mentioned in humanistic revisions of American history. However, it honors religious freedom and the Christian principles on which America was founded. The largest granite monument standing 81 feet tall, it was commissioned by the Pilgrim Society, designed by Hammatt Billings of Boston, Massachusetts, completed in 1888, and dedicated in 1889. Its location is a state park on Allerton Street in Plymouth, Massachusetts.

“Faith” is at the center of the monument. She is 36 feet tall and weighs 180 tons. She is eloquently clothed and faces Plymouth Harbor and England, while standing with one foot on Plymouth Rock. Her right hand points to heaven and her left hand holds a Geneva Bible, the Bible read by the Pilgrims. This illustrates that America’s founding fathers had faith in God. And they believed that faith is the cornerstone of freedom and the bedrock of the American republic. The star on Faith’s forehead illustrates the divine light imparting biblical wisdom to every aspect of life. Faith preceded and inspired the building of the Statue of Liberty standing on Ellis Island. The monument features the Ten Commandments, and various other biblical epitaphs. Faith is so important in the struggle to restore liberty and prosperity to America because the human race is undeniably religious.

All cultures are built on various religious faiths. Christianity created America. Friedrich Nietzsche, the founder of modern Nihilism and Atheism, states that if society rejects Christianity, then that will mean the end of any hope of maintaining human equality and rights. He also said, “Another Christian concept, no less crazy: the concept of equality of souls before God. This concept furnishes the prototype of all theories of equal rights.”

John Winthrop led the Great Migration to America in the 1600s. He and all our forefathers founded America on Scripture. The faith of America’s founders affirmed the sanctity of each individual. Each human life was equal in the eyes of the Lord God. The Ten Commandments gave people a sense of obligation toward each other. Free societies are the only societies with moral foundations, and those foundations are observable in their political, economic, legal, cultural and spiritual lives. Some multi-cultural advocates want us to believe that America is a product of many religious faiths. In reality, if it weren’t for the Pilgrims, whose intent was to establish a Christian nation, there would be no American republic today.

American cultural values have upheld Christian standards of honor, justice, morality, equality, self-rule and esteem for life. Clearly, these virtues have underscored American thought and progress and life for hundreds of years. The vision of our Founding Fathers was that America would have a Constitution supporting the people to impose their will on the government, not the government imposing its will on the people. The National Monument to the Forefathers was made and erected to serve as a reminder to all Americans and the world of the Christian heritage of America and the requirement of Americans to preserve it. As President George Washington said, “The time is near at hand which must determine whether Americans are to be free men or slaves.” (Maj. Jim Linzey is a retired Army chaplain.)