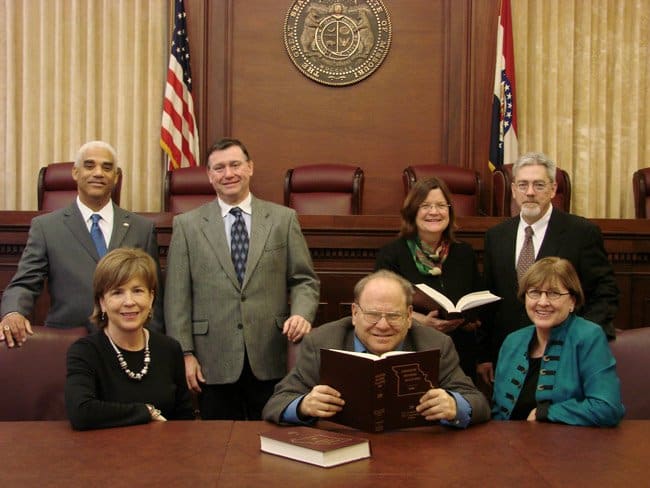 The Missouri Supreme Court has upheld a Missouri law that provides benefits to the surviving spouses of deceased public safety officers. A St. Louis area man had challenged the law, claiming that it discriminated against him based on his “sexual orientation.”

The lawsuit followed the death of Corporal Dennis Englehard, a state highway patrol trooper who was killed in the line of duty on Christmas day of 2009 while assisting a motorist on Interstate 44. Kelly Glossip maintained that he had cohabited with Englehard for fifteen years as his same-sex “partner.” Glossip argued that he should be accorded survivor’s benefits because they had a “committed, marital relationship.”

Englehard was a member of the Missouri Transportation Department Employees’ and Highway Patrol Retirement System. Under that system, survivor’s benefits are payable to a surviving spouse or surviving unemancipated children under the age of 21. All state employee pension programs operate under similar provisions.

The Supreme Court concluded, as the law plainly states, that Glossip was denied benefits not because of his “sexual orientation,” but because he and Englehardt were not married.

The judges correctly pointed out that all unmarried “couples” are ineligible for survivor benefits regardless of whether they are of the same or opposite sex.

Attorneys for Glossip had pointed to the recent Supreme Court decision in United States v. Windsor, where the High Court ruled that federal benefits must be payable to same-sex “spouses” when they have been legally “married” in the state in which they reside. The Missouri Supreme Court rightly determined that that case was irrelevant, since Glossip and the state trooper had never been legally “married” in Missouri or in any other state.

While the decision of the court majority is not attributed to any single author, it was joined by Chief Judge Mary Rhodes Russell, and Judges Patricia Breckenridge, Zel Fischer, Laura Denver Stith and Paul Wilson. Judge Richard Teitelman filed the dissent, which was joined by Judge George Draper.

In his dissent, Teitelman said the statute was designed to “specifically discriminate against gay men and lesbians by categorically denying them crucial state benefits …” He accused the Missouri Legislature of engaging in “intentional, invidious, and specifically targeted discrimination.”

But the Highway Patrol Retirement System was established by the General Assembly in 1955. The subject of homosexuality was not even a subject of discussion, because none would have envisioned at the time that homosexuals could be legally “married,” since it contradicts the very meaning of the term.

Had Teitelman’s thinking prevailed in the Supreme Court, state retirement trustees would have been left with the impossible task of evaluating the nature and duration of relationships between cohabiting individuals and live-in “lovers.” How state retirement officers would have determined the depth of emotional attachment and level of intimacy between cohabiting “couples” as a threshold for benefits eligibility is anybody’s guess. (This article originally appeared in the Nov. 5 Missouri Family Policy newsletter and is reprinted with permission.)