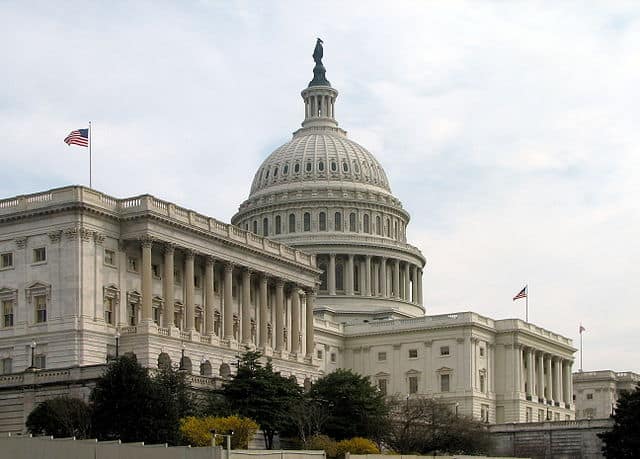 WASHINGTON – In a move that many believe could jeopardize religious liberty, the United States Senate passed legislation that will protect homosexual and transgendered individuals from discrimination under federal employment law. According to the bill, employers cannot discriminate against employees or potential employees on the basis of “sexual orientation” or “gender identity,” which were added alongside the protected classifications of race, color, national origin, gender, age and disability.

In a 64-32 vote, Senators approved the Employment Non-discrimination Act (ENDA), Nov. 7, after rejecting an amendment that would protect the religious liberty of employers. Missouri Sen. Claire McCaskill, a Democrat, voted for the bill, while Republican Sen. Roy Blunt opposed it.

ENDA will now be deliberated in the U.S. House of Representatives, where Speaker John Boehner opposes the bill. President Obama supports the bill, however, and urged the House to approve it. “One party in one house of Congress should not stand in the way of millions of Americans who want to go to work each day and simply be judged by the job they do,” Obama said.

But critics of the bill, both in Missouri and throughout the U.S., suggest that ENDA would threaten the religious liberty of employers, while also affirming a view of sexuality that is both controversial and opposed to Scripture.

In a 55-43 roll call vote taken only two hours before passage of ENDA, the Senate rejected an amendment by Sen. Pat Toomey, R.-Pa., that offered greater protection for the religious liberty of employers.

Missouri Baptist Convention (MBC) Executive Director John Yeats warns that this bill could especially threaten the Great Commission ministries of Missouri Baptists and called on them to contact their U.S. representatives and express their biblical convictions.

“While churches are exempted, camps, universities, children’s homes, senior adult homes and others are directly in the bull’s-eye of those who want to gain complete cultural acceptance of their behavior that was deemed illegally deviant just a few years ago,” Yeats said. “Imagine the impact on our Missouri Baptist Children’s Home (MBCH) that has a stellar reputation of Christian influence on the lives of those often neglected by society. Yet, ENDA would impede our hiring capacities to such an extent that the MBCH would be forced to compromise biblical conviction to continue to function as a ministry. This is a clear violation of religious liberties.”

“Congress should not elevate individual’s sexual preferences above constitutionally guaranteed freedoms,” Hinkle said. “ENDA is a conscience-crushing threat to our religious liberty.”

Kerry Messer, lobbyist for the MBC, said that the bill in fact forces Christians to define truth not by Scripture, but by the standards of the homosexual agenda or any other group that “has the political advantage.”

“The U.S. Senate passing this is further evidence how far our nation is adrift in postmodernism, the idea that real truth no longer matters in the highest levels governance,” Messer said. “This is unbelievably important, and it underscores the crying need for Christian citizens to live out their lives in the way that God intended – our allegiance first to Christ. But then, also, that allegiance means we are supposed to love our neighbors and be engaged in the culture.”

“As a result,” Ortwerth wrote, “a teacher in a private Christian high school could choose to ‘marry’ a same-sex person in contradiction to biblical principles, and the school would be unable to release him from employment for his defiance of church teaching. An elementary school teacher in a Christian school (or a public school for that matter) could choose to dress as a transvestite, or even undergo a sex change operation, and the school would be unable to dismiss the teacher for such actions.”

“Homosexuals and individuals who claim to be ‘transgendered’ would be able to file complaints against employers with the federal Equal Employment Opportunity Commission and file lawsuits in federal court,” he added. “The U.S. Attorney General would have the authority to prosecute cases of alleged ‘sexual orientation’ discrimination.”