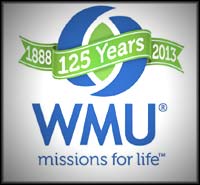 ROCKY MOUNT – A missionary retreat held Oct. 7-8 at Cross Pointe Retreat Center here drew 46 missionaries, including 35 emeritus missionaries who spent time refreshing, fellowshipping and swapping stories from their times of service on the mission field. This year’s theme was “Down Memory Lane” and was hosted by the Madge Committee of the Missouri WMU (MWMU). Both IMB and NAMB missionaries attended this event, according to MWMU Missionary Advocate Maryetta Dennis. Mike Dennis led two Bible studies titled “How beautiful are the feet of those who bring good news,” based on Rom. 10:15. Carol and Bill Bowers presented information about “The Bucket Project” sponsored by the Baptist Global Response, and fourteen of the emeritus missionaries shared stories of their times on the mission field.