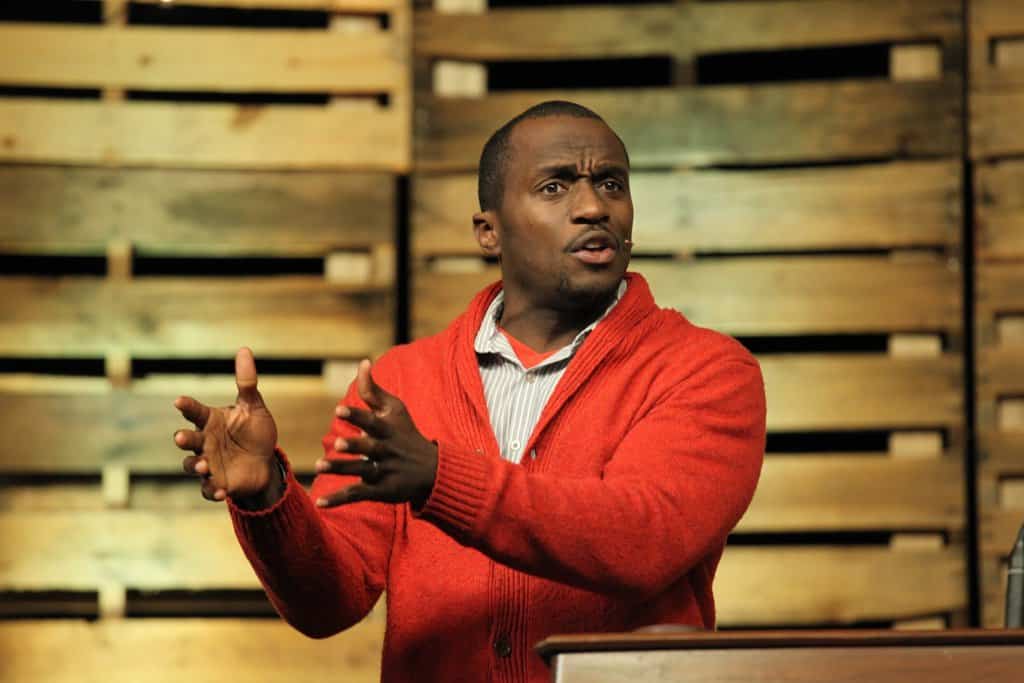 KANSAS CITY – Jesus told His followers to make disciples, and Dhati Lewis lives this out in unique ways. Lewis, founding pastor of Blueprint Church in Atlanta, Ga., was a featured speaker at the CORE Conference during the Missouri Baptist Convention’s annual meeting, Oct. 29.

Lewis shared a humorous but poignant illustration of talk versus action.

“It came to pass that a group of people existed who called themselves fishermen,” Lewis said. “There were many fish around and many streams and lakes with fish. These who called themselves fishermen came and talked about their call to fish. They defended fishing as the occupation. These fishermen built large buildings called fishing headquarters. They want others to be fishermen, but one thing they didn’t do was to fish. They built power plants to pump water to the fish. Some related to the fish in a good way so the fish would know the difference between good and bad fishermen.”

“Imagine how hurt they were when someone said that if they didn’t catch fish, they weren’t a fisherman,” Lewis said. “Is a person really a fisherman if he never catches a fish?”

“This is very convicting message for the church,” Lewis said, suggesting that too many Christians claim to follow the Fisher of Men while never casting their evangelistic nets in the water. Lewis, however, has devoted himself to sharing the gospel and teaching people how to live for Christ and make disciples themselves.

“I was not raised in church, but at the altar of football,” Lewis said. So when he established Blueprint Church, Atlanta, he wanted to reach those who, like himself, were not comfortable in a normal church environment. Lewis left Denton, Texas, with 25 members to start the church in 2010. The 25 became 40, and is now 400.

“I wanted to create a place I could invite my friends to,” Lewis said. “My call to pastor isn’t to preach, but so I can make disciples.”

“People want something that is true and real,” he added. For this reason, Lewis and his wife have invited somebody to live with their family for the past decade, so that he could help them learn how to follow Christ in every aspect of life.

“The reality was I didn’t plant the church in 2010,” Lewis said, “but it was in 2001, when we first allowed people to move in our house. Most of the people that moved with us were disciples in our home.”

There is a difference between making disciples and getting “a bunch of church tranfers,” Lewis added. “You can plant a church and not make disciples. If you make disciples, the result is a church.”

“One of the things we miss as believers is recapturing the principle of hospitality,” Lewis said. “The gospel has a lot to say about hospitality. It is one requirement as an elder. It’s not just about baking cookies … and making the house look nice, but (it is about) creating a space to welcome people.”

Lewis encouraged MBC messengers to be authentic and “quit treating people like projects and start treating them like people.” He told of an atheist neighbor with a “No Proselytizing” sign on her door. His family befriended the neighbor, and they took each other’s kids to sports and traded house keys. When one of Lewis’ daughters asked the atheist neighbor if the sign meant that she did not like Lewis’ family, the atheist backpedaled. On her “No Proselytizing” sign, she added the words, “unless you are the nice neighbors next door.”

Relationships are key to advancing the faith, Lewis said. “I fear we are turning Christianity into conferences, concerts and church services. The world will know we are his disciples by our love for one another.”

“Many times,” he added, “people will turn to the Christian community before they are converted to Christianity.”

Lewis urged messengers to think how their lives can intersect with other people’s lives.

“If we really want to go about making disciples,” he said, “we have to be willing to give up our lives for the sake of the gospel.”