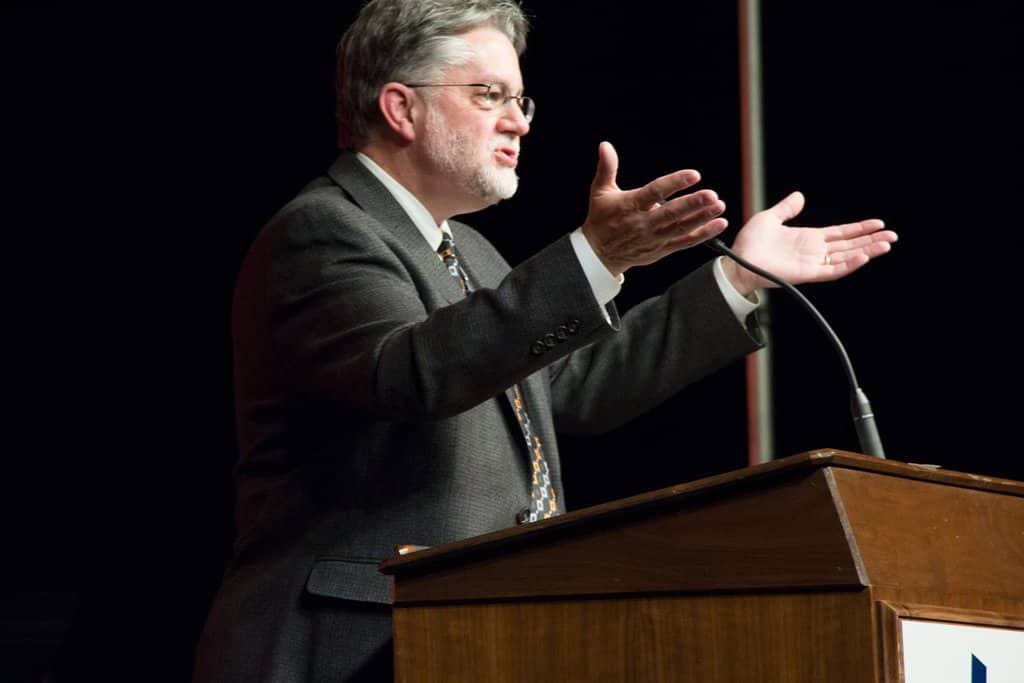 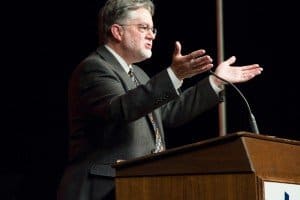 KANSAS CITY – Fullness in life and ministry come only through knowing Christ, two Southern Baptist seminary professors said when asked why ministers should sacrifice a full day for a conference on “seeing and savoring the Son of God.”

“We can’t minister if we’re not full of God,” said Thomas Schreiner, professor of New Testament interpretation and associate dean of Scripture and interpretation at the Southern Baptist Theological Seminary in Louisville, Ky.

“The greatest good in life is knowing Christ,” Bruce Ware, professor of Christian theology at Southern Seminary, added. Both of these Southern Baptist scholars were featured speakers at the Missouri Baptist Convention (MBC) Pastor’s Conference, Oct. 28, alongside D.A. Carson, research professor of New Testament at Trinity Evangelical Divinity School in Deerfield, Ill. During the pastor’s conference, these scholars spoke on characteristics of Jesus.

Schreiner spoke about Jesus, the incarnate Son, from Phil. 2:5-11. According to this passage, he explained, Christ “humbled himself in four ways – not exploiting his divinity, making himself as nothing, coming to earth to die and dying in the most humiliating of ways. … He emptied himself, not of his deity, but he took on the nature of a servant. He emptied himself by adding humanity. Jesus didn’t come to earth to show off.”

Pastors “are called to be leaders, not dictators,” and like Christ they should be “others-centered,” Schreiner said. “The goal of the pastor isn’t to feel better about ourselves, but to see others grow in Christ and see others saved.”

“We have to crucify the lust to be great,” he said. “We need to find Joy and significance not in how big the church is …, but in Jesus Christ. God always honors those who honor him.”

“You are either in Adam or in Christ,” he said. “There are terrible implications if your faith is worthless. We are liars if there is no resurrection, we will go to hell in our sins. If Christ is not raised, we are more pitiful than anyone and we put faith in the untruth.”

“Our future is certain,” he added, “but not yet. Why do we believe in Christianity? Because it is true. Our victory over death comes when the kingdom comes. The kingdom will be given by the Son to the Father.”

Ware spoke on the Spirit of the anointed Messiah in Luke 4:14-21.

“Questions are often your friends,” said Ware, who asked why Jesus needed the Holy Spirit and what the Spirit added to Jesus’ deity. Answering his own question, Ware explained that since Jesus was completely divine, His deity did not increase because of the Holy Spirit’s anointing.

“But Jesus lived his life as a man, although he was fully God,” Ware added. “What can the Spirit of God add to the humanity of Christ? Everything.”

Later, Ware shared that Jesus was the coming king described in Ps. 2:1-12 and called Jesus the “prototype of a Psalm 1 man.”

“The theme song of Hell is ‘I Did It My Way.’ God scoffs at the folly of their ways. After laughter comes fury,” Ware said. “As Messiah, Jesus earns the right to be given the nations of the world, something Satan offered during the temptation of Christ. Jesus did not reject the offer, just the terms.”

“Jesus is not referenced as ‘Word’ anywhere else in John’s gospel,” Carson said. “‘Word’ in ancient literature can mean thought, science, logic or outward expression in speech. In the beginning God expressed himself.”

Carson added that people cannot “gain greater understanding of His greatness” without understanding their “sinfulness.” In a later address, Carson spoke about Jesus as the propitiation of sin, as this is described in Rom. 3:21-26.

“Propitiation is a sacrificial act where God becomes favorable,” Carson explained. “God stands over us in wrath because He is holy and we are sinful. He stands over us in love because that’s the kind of God He is. God is always perfectly fair. In the cross of Christ, sin is cancelled. God did this to demonstrate His righteousness.”