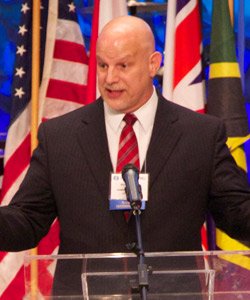 Kansas City – Missouri Baptists were challenged to be involved in missions efforts with believers in North America and around the world at the annual Partnership Missions luncheon on Oct. 29 at the Missouri Baptist Convention (MBC) annual meeting.

Hedger said he is looking for mission volunteers who will serve in short-term mission opportunities in these locations. He added they do not want Missouri churches to fund salaries of pastors or workers in those locations nor do they want them to pay for construction or purchase of church buildings (although they can assist local churches in those efforts). He said he believes God is calling Missourians to be involved in a Luke 10:2 harvest. Hedger said, “You say, ‘Let’s go’ and I will help you get there.”

Pastor Oropeza told the assembled Missouri leaders he and others in Puebla feel very blessed every time Missourians come down to assist. “All the churches … are amazed at the results of the partnership.”

He said on a recent trip to Puebla, 30 new families were discovered as prospects and several were saved.

Oropeza said the Puebla/Tlaxcala convention has a goal of 1,000 baptisms as a result of the partnership and they have already baptized 600 new believers and they have begun the process of starting 50 new congregations.

“We are ahead of schedule. Together we can do great things for God. We continue to pray to God and we are so blessed,” said Oropeza.

Hedger said Oropeza puts many miles on his vehicle, often driving for 6 hours each way to preach in outlying churches. He noted gasoline is expensive in Mexico, but Oropeza does not hesitate to make those trips.

Oropeza quipped, “When I come to preach at those churches, they often say to me ‘Where are the gringos? (white faces).’ They are waiting for you to come.”

He said they invite Missourians to come and do missions work in the cities, up in the mountains, among indigenous peoples and with university students. He added there is a great need to reach men and young people through the partnership. The number one need, according to the missions leaders, is teaching and modeling evangelism and helping them to prepare their leaders in the churches.

Roger Graves spoke of the need for assistance with church planting in Iowa. He expressed thanks for the partnership and pointed out they have about 110 Southern Baptist churches in Missouri’s neighbor to the north. There are nearly 3 million people in Iowa and about 900 cities and towns.

There are about 800 towns and nearly 50 counties in need of an evangelical witness for Christ. Southern Baptists can help the churches there by providing volunteers for evangelism projects at town festivals, assisting with VBS, doing light construction on church buildings and prayer-walking in unreached areas.

“Some of these churches are running 25 or less and your partnership is huge because when we suggest projects they say, ‘Well, we can’t do that,’ but we mention a Missouri team and they think, ‘Well, we could do it with that kind of help,’” Graves said.

“It bolsters their confidence,” He added.

Graves said the culture in Iowa is different than Missouri, but Iowans are friendly and they make friends with Missourians easily.

He thanked Missouri for their partnership efforts in the past few years.

Hedger said there are needs for Missouri volunteers in Albany, New York, Norhtern Ontario, Canada and in the Western Gateway Cluster region of Africa. He added some of those partnerships are having some difficulty gaining traction and he urged MBC pastors and church leaders to contact him and make efforts to begin partnership work in those places where there is much need for a gospel witness.