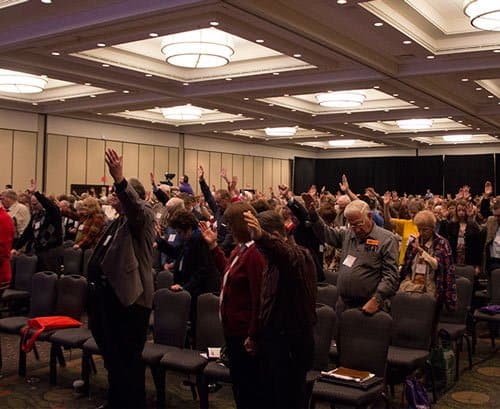 Resolution 2, on the U.S. Supreme Court Ruling Striking Down the Defense of Marriage Act (DOMA), blasted the June ruling that federally recognized same-sex “marriage.” “… Redefining the concept and legality of marriage to mean anything other than the union between one man and one woman would fundamentally undermine the historic and biblical foundation of a healthy society” and “equating same-sex ‘marriage’ relationships with heterosexual marriage creates a host of religious liberty and freedom of conscience issues,” the resolution reads in part.

It encouraged churches to make marriage convictions clear in confessions of faith and adjust wedding policies, asked pastors to speak biblically on the subject and reminded MBC churches to continue to evangelize and love “all people regardless of their perceived sexual identity and/or sexual orientation, praying that God will bring all into a saving knowledge” of Jesus.

The resolution passed overwhelmingly with perhaps a dozen in opposition. Brad Haines, a messenger from First Baptist, Grandview, opposed the resolution saying it did not go far enough and had “no teeth.”

Resolution 4: Redoubling support for moving to a 50/50 split of Cooperative Program funds in Missouri and Southern Baptist Convention-wide.

Resolution 1: Expressing courtesy appreciation to MBC executive board officers and staff, the local arrangements committee and the staff of Blue River-Kansas City Baptist Association and the Sheraton Hotel.