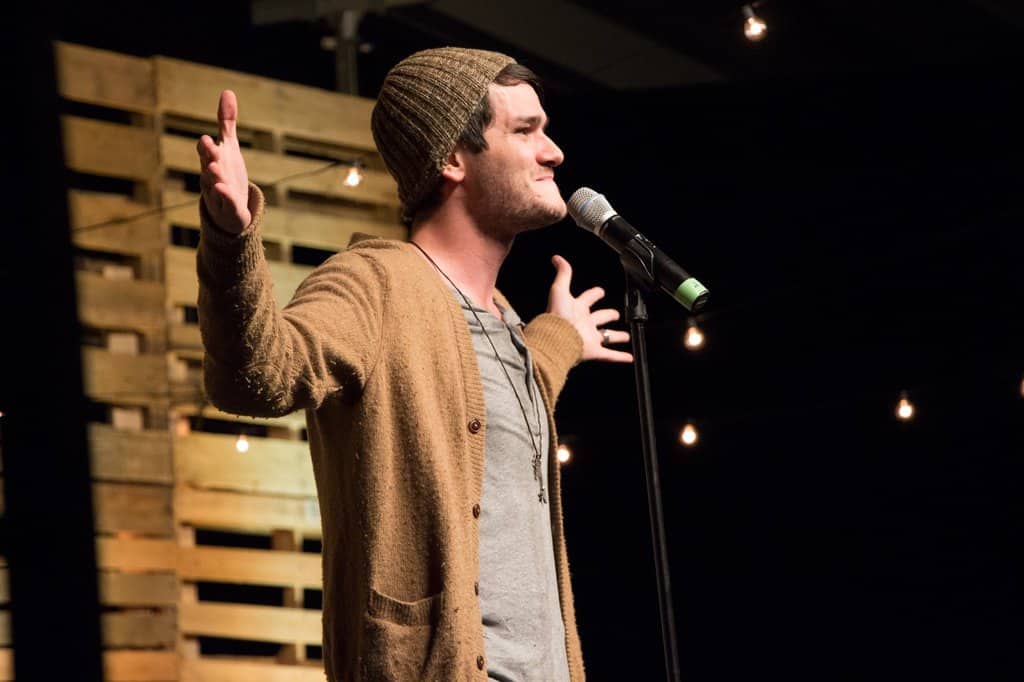 KANSAS CITY – Young men creatively combined the contemporary and the traditional to share eternal truths during the annual meeting of the Missouri Baptist Convention (MBC), Oct. 28-30.

Wearing a baggy brown sweater and a stocking hat, David Bowden stood alone on stage. He spoke into the microphone.

“In the beginning, there were words.”

The audience sat in rapt attention as he recited a rapid-fire poem extolling the truth and beauty of the Bible.

“They are the words of God and we are his listeners. I believe God still speaks. I believe in the Scriptures.”

Bowden is a poet and is passionate about words – and The Word.

“The root of God in us is in our vocabulary,” he said during an interview with The Pathway.

Throughout his life, Bowden has enjoyed music and has had a knack for memorizing movies. He entered Oklahoma Christian University planning to become a youth minister. As he majored in Bible and biblical languages, a deep love for languages developed. Then he wrote his first poem, and it felt like a faucet turned on. Bowden started showing up at open mic nights, sharing his poetry at bars and coffee houses. He also publishes his poetry on www.davidbowdenpoetry.com.

Now at 25, poetry is his full-time work, including both ministry and commissions from corporate clients. Each new work starts with a month of reading the Bible, books and commentaries. Then Bowden buries himself in the precise work of crafting words in rhyme and visual imagery. After hours of practice, the presentation is perfected.

Some poems showcase Scripture, such as one Bowden delivered at the annual meeting based on the “I Am” statements of Jesus. Others focus on social and cultural issues.

“My goal,” Bowden said, “is to speak to the Bride and help her rediscover the gospel and make it beautiful again.”

The rich, smooth harmonies of Veritas also resonated within the convention hall during the MBC’s annual meeting. The musical group’s members – Jeff Anderson, James Berrian, Andrew Goodwin, Jordan Johnson and Lucas Scott Lawrence – want to live up to the meaning of Veritas, which is a Latin word for “truth.”

“We want to sing songs that communicate the truth in God’s word – that while we were still sinners, he died on the cross for us,” Goodwin said. “We also demonstrate that truth with our lives.”

Veritas formed after the five men performed as part of the 40th anniversary of the group Truth in 2011. They describe their genre as “contemporary classical.” Each of the vocalists have powerful voices that blend beautifully on hymns, original worship arrangements and Christian classics. The group also performed “O Holy Night” from their new Christmas album.

Veritas began touring in 2013 and will have 120 appearances this year.

Anderson said the foundation for their music is faith, hope and love.

“We want to draw people closer in their faith, give hope to the churched and unchurched, and share (their music and its message) in love,” he said.