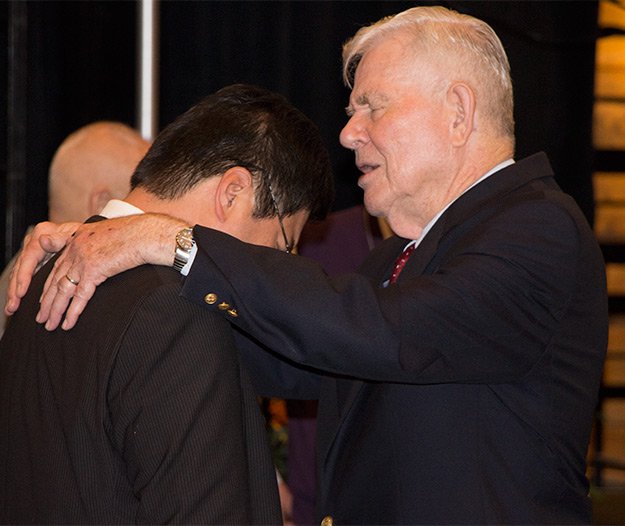 KANSAS CITY – The adage is familiar: prayer leads to revival.

This was the gist of a talk by author and Gordon-Conwell Theological Seminary professor Robert Coleman during the CORE conference at the Missouri Baptist Convention’s annual meeting, Oct. 29.

“Jesus told the disciples to replicate what (He did) – we call it the Great Commission,” he added. “We’re always looking to reproduce. Through multiplication, someday, the whole world will hear about Jesus.”

In the first chapter of Acts, Coleman said, Jesus commands His disciples to return to Jerusalem and wait for the outpouring of the Holy Spirit, who would empower them to testify to Christ throughout the world. After Christ’s ascencion, the disciples obeyed their Lord and gathered together in an upper room in Jerusalem.

“Acts begins as they go to that place and unite their hearts in prayer,” Coleman said. “Prayer is basically communion of the Spirit, communion with the very presence of God Himself. The Spirit of the Lord brings to mind things that need to be taken care of. They were very sensitive to what the Spirit was teaching them.”

“Anytime you see a revival, you can be sure it started in a prayer meeting,” Coleman added. At his first pastorate, in fact, the prayer of women in his church stirred revival.

“When those faithful women got on their knees, they were confident God would hear,” Coleman said. “Most of their husbands and family members got saved.”

Coleman also told of a 1970 revival in Asbury College in Kentucky that occurred during the Vietnam War, which began when some students and faculty awoke early for prayer.

“On February 3, the prayers were answered in an awesome way,” Coleman said. “The dean was to speak and offered his testimony. Others offered recent testimonies. One on campus for three years had drifted from the Lord. He said the night before that he got on his knees and got things settled with God. It was the first time in years he felt joy from God.

“People were asked to come and pray, and the altar quickly filled. It was hard to hear the testimonies. They borrowed a public address system. This continued to noon, and no one was leaving. It continued to the afternoon, and basketball games were cancelled. The only thing that mattered was getting right with God. A television crew came and their prime time newscast said everyone should put down newspapers and gather around the television. He showed for two and a half minutes what he witnessed that afternoon.”

Coleman said that the chapel was full, and others gathered all over the building praying on their knees. On the second day the nearby seminary was closed and, like the college, stayed closed the rest of the week. Wire services came. The third day newspapers reported the revival.

Calls came from out of state wanting people to come to their colleges and communities and tell of the revival. Three Asbury students spoke in Texas, each for five minutes, and six students got saved. Students volunteered for community service to elderly and to the city.

“It continued 185 hours with no publicity at all from the college or the seminary, no preacher, no invitation. When school got back in session, there was no benediction,” Coleman said.

Coleman said at least 50 colleges and 2,000 communities were blessed with first-hand revival accounts. The revival spirit continued four months and spread overseas “in ways that can’t be explained.”

“Are you living in the Spirit? Or more important, what about your church? Is your witness going forth in power in the love of Jesus, in the revival Spirit of Pentecost? That is reality, Coleman said, “That is eternity.”

After Coleman spoke, he offered an invitation where some two dozen Missouri Baptists gathered at the altar on their knees. Others remained in prayer after Coleman’s session of the CORE Conference ended.