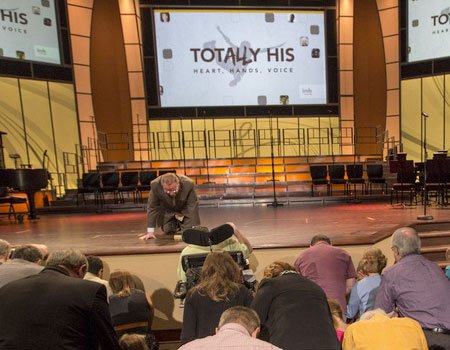 SPRINGFIELD – Kody and Erin Brandt were among 65 new missionaries appointed during the International Mission Board’s Aug. 28 service at Liberty Baptist Church in Hampton, Va. During the service, the IMB appointed two families and another individual with ties to Missouri. And like 27 of the other new appointees, the Brandts served overseas before accepting their new, career assignment in Malawi, Africa.

The Aug. 28 appointment service, Kody said, was “absolutely amazing. It was probably the most spirit-filled service I have ever been a part of. It was incredible to see how God does use every walk of life to bring glory to Him.”

Both of the Brandt’s attended church their whole lives, but it was only after they were married that they surrendered their lives to Christ. When Kody began a true relationship with Christ, he had already been serving as a deacon at the Crossway Baptist Church, Springfield, and sang a solo during the service where he professed his faith in Christ. Soon afterward, God began to call him away from banking, where he was building a successful career, to serve on the mission field.

“I was very resistant at first when Kody shared to me what God was telling him,” Erin confessed. “My first reaction was, well, Caleb and I will be waiting for you when you get back. Obviously, God had a lot of work to do in my heart. I was very content and comfortable. We were living the American dream. But I began praying, and over the course of a few months, God shared with me his vision for our family.”

The Brandts gave credit to the missions emphasis at Crossway Baptist Church for helping to open their eyes to the worldwide need for the gospel during this time.

So, abandoning the American dream, the Brandt family followed God’s call first to train at Southwestern Baptist Theological Seminary in Fort Worth, Texas, and then to serve as International Service Corp missionaries in Johannesburg, South Africa.

“We saw God do amazing things while we were there,” Kody said. In Johannesburg, they started a soup kitchen that, on the first day, attracted only two men. One of these men, however, professed faith in Christ, and he began to share the gospel with others.

“To see people have an excitement in God’s Word was very joyous for me,” Kody said. Soon, the soup kitchen had an average attendance of 50 people per day, and it remained in operation even after the Brandts returned to the United States.

“We try to do things that are reproducible,” Kody said. “Once a missionary leaves, it doesn’t end.”

Now, the Brandts are preparing for their new assignment in Malawi as they wait for a work permit that will allow them to head to the mission field. When they arrive in Malawi, Kody will serve as a logistics coordinator for missionaries throughout the country, overseeing their housing, vehicles, work permits and other logistical matters.

“Then, during the time that we’re not doing logistical work, we’ll be able to be a part of a church planting team there,” Kody said. “We’re excited about that.”

“Thank you, Missouri Baptists, for giving to the Cooperative Program, to Lottie Moon,” he added. “Without that, we wouldn’t be able to go.”

In the aftermath of the reversal of Roe v. Wade, the Missouri Baptist Children’s Home is standing firm in its efforts to give help, hope and healing to parents and