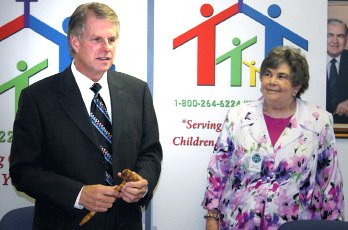 BRIDGETON – Trustees approved a modestly larger budget for 2014, but it was reports of 18 professions of faith through Missouri Baptist Children’s Home (MBCH) ministries that were the highlight of the MBCH trustee meeting Oct. 8 here.

Of those 18 salvations, eight were during the MBCH camp this July at Camp Palestine in Chilhowee, south of Warrensburg. Twelve more rededicated their lives to Christ. MBCH staff and volunteers worked with 36 boys and 36 girls from various MBCH ministries across the state, most of whom have never had a camp experience.

One of MBCH’s newest ministries, Freedom 43:19 is a collaboration with International Crisis Aid. A safe house for women and girls trying to leave human trafficking/prostitution, it takes its name from the 43rd chapter of Isaiah, which says “See, I am doing a new thing! Now it springs up; do you not perceive it? I am making a way in the wilderness and streams in the wasteland.”

Women that want out of their lifestyle are either picked up by a detective or they turn themselves in with a desire to get help and turn their lives around. There are three phases to the program that takes place at an undisclosed safe house in the St. Louis area. The first focuses on life skills and getting the women to see themselves as valuable. The second phase focuses on education – because most have dropped out of school – and job training. Phase three is preparing her to go out on her own to lead a normal life. Statistics suggest on average it will take a woman seven times leaving and returning to the program for it to finally sink in. Many will be addicted to drugs, and withdrawal adds to the hardship of sticking with the rehabilitation program.

Freedom 43:19 has worked with 24 women so far in 2013. That number now includes minors checked into the program by their families.

In all, MBCH Children and Family Ministries has served 340 clients this year, a slight increase over the same time period in 2012. There are currently 265 foster/adoptive homes overseen by MBCH, and 120 relative/kinship homes. More than 1,400 families and 2,400 individuals have been served by MBCH in 2013.

There was also talk that the state of Missouri is considering privatizing its foster care system. MBCH homes and families are part of a pilot program in the northwest corner of the state to examine the viability of the idea. That translates to 400 additional “clients” within the MBCH system and 10 new hires.

“We’ve had great support in that part of the state, but our presence has almost been nonexistent,” Robinson said. “This is allowing us to be much more visible.”

Betty Cox, a member of Illmo Baptist Church in Scott City and chair of the MBCH board, passed the gavel to incoming chair Bill Vail, pastor of First Baptist Church, Poplar Bluff.

The next MBCH board meeting is Jan. 27-28 at the main MBCH campus in Bridgeton.