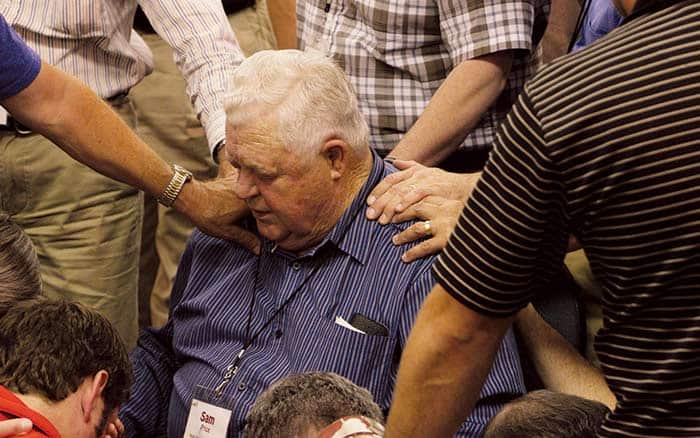 LEBANON – Since January, 80-year-old Samuel Price has led 104 inmates in Laclede County Jail to profess faith in Jesus Christ, and a car wreck south of Camdenton, has not dampened his evangelistic fervor.

Price, who serves as pastor of Wood Street Baptist Church, Lebanon, has practiced jail ministry for nearly four years. Since that time, sex offenders and murderers have been among the inmates who have surrendered their lives to Christ. One inmate, who was raised in Buddhism, was charged with three cases of second-degree murder, but he repented of his sins and now leads a Bible study in his cell.

“You ought to hear him pray,” Price said. “He is growing. He is feeding on God’s word.”

According to Price, Southern Baptists should heed the words of Heb. 13:3, “Remember the prisoners, as though you were in prison with them.” Apart from the grace of God, he added, he actually may have ended up in a prison cell.

“Now, I don’t preach apple-pie-in-the-sky salvation. I tell them, ‘Listen, it is going to be rough. You are embarking on a totally different lifestyle. When Christ comes into your heart, He means business.”

“I don’t want to sound boastful,” Price added, “but God has equipped me to do this ministry. I understand these men. I cry with them. I pray with them. After the others leave, they’ll come over to me and hang onto me and cry like a baby.”

When Price first began his ministry at Laclede County Jail, he would have one hour to work with men from five different cell-blocks. Recognizing that this time restraint would hinder ministry, he asked if he could go into the cell blocks to speak with them. When authorities answered that this would be too dangerous, Price replied, “I won’t hurt them.”

Eventually, Price got permission to enter the cell blocks, and only two prisoners have tried to assault him since that time.

“I slammed them up against the wall before they even knew what happened,” Price said. “I caught them by surprise. They thought I was just some old man. I’m not an old man. I am still very young.”

Today, Price is confined to a wheel chair at a Christian Health Care facility in Lebanon, where he prays that God will show him what He wants to do with his life. On Aug. 19, he and his wife, Linda, were driving home on Missouri Highway 5, south of Camdenton, when another driver took a left turn in front of them.

“I can still see that guy stop, and then shoot in front of us,” Price said. “I mean, right in front of us. All I was able to do was turn, so that my side of the truck took the hit.”

Although no fatalities resulted from the collision, both Price and his wife were badly injured and are still recovering. Nevertheless, Price soon found opportunities to share the gospel. He led his nurse at a Springfield hospital to kneel beside his bed and surrender her life to Christ, and he continues to witness to staff members and other acquaintances at Christian Health Care North.

“The greatest joy I have ever had in my life is leading somebody to Christ,” Price said. “It is not me. The Holy Spirit is right here, and He pounces on them. And I love it.”