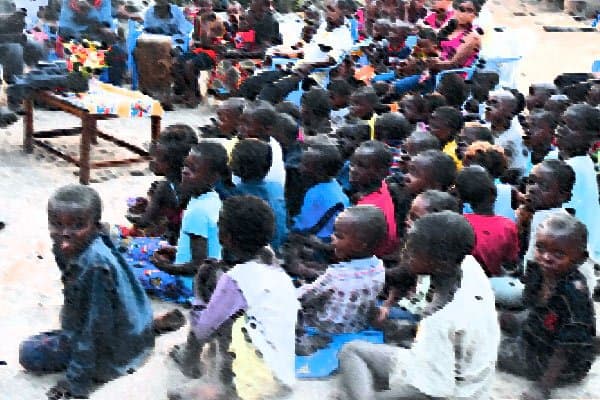 KINSHASA, Congo – It is a dark, occult-like world, but a Missouri pastor and his family took the message of Jesus’ love to the people of the Democratic Republic of Congo during a recent mission trip.

First Baptist, LaBelle, Pastor James Renot and family took a two-week trip in June to Kinshasa, Democratic Republic of Congo, a place where they served as International Mission Board (IMB) missionaries from 2005-07. Now, few missionaries are there, with even IMB pulling out.

“The obstacles are great,” Renot said. “The average person lives on 50 cents a day. In the past, children were forced to serve as soldiers and women were systematically raped to keep them in line,” Renot told a northeast Missouri Woman’s Missionary Union event in August.

“There is a strong Catholic presence,” he said. “They are a superstitious people. Witch doctors play a huge part of that society. They live under the influence of cults like Islam, the Mormons and Jehovah Witnesses. The cults use church tradition or a source other than the Scriptures as their authority. They distorted the doctrines of the Scriptures, God, and salvation.”

Many indigenous Protestant denominations have merged under government control, but the EBB, (an association of seven Baptist Churches, an independent Baptist church, and several on-going Bible studies) stayed autonomous.

“Church members and even pastors questioned their beliefs as Baptists, and why they couldn’t accept the baptism of a believer from another denomination or faith. A number of Baptist pastors are just that – in name only. They’ve been looking for missionaries for a number of years and didn’t know what to do. We told Bible stories the people could remember and share. Our pastor’s training included an overview of Baptist doctrine and beliefs that distinguish Southern Baptists,” Renot said. Some people prayed, surrendering their lives to Christ and were discipled on how to take their decision further.

LaBelle Baptist Church is in the Mt. Salem/Wyaconda Southern Baptist Association and has been joined by other churches in the association like Alexandria Baptist Church, which became a stateside partner for Mbenseki Baptist Church and school in Congo. Other Southern Baptists helped Delvo Baptist Church buy property for a future church building and school, while others began a chicken ministry – chickens for Congo Bible study members, and eggs for widows and families. The workers raised $2,000 for a church generator and lights.

Renot assisted in two Congo pastor ordinations this summer, each lasting four-plus hours. While en route to one of those services, he stopped at a furniture store and led four people to Christ.

Renot said one church had started with just a pastor who had been taught how to share Jesus. Pretty soon a few became Christians, then still others did the same. The pastor requested help because the church has grown to 110, Renot said.

One church was so happy someone from this side of the world prayed for them and wanted the best for them. We could’ve just said, ‘Pray for Congo’ and they would have been happy, Renot said.

“Now, churches there are growing – with schools. One reason missionaries start schools is because it improves their quality of life and gets them to read the Bible. In 2007, their prayer requests were about rapes, bombs and landmines. It’s not so much that now. But there is still often just one meal a day.”

The Congo has other real issues. For example, electrical lines run on the ground and accidental electrocutions are common. Unemployment is 65 percent.

“Women’s lives in Congo are very hard and very sad,” Renot said, adding that he encouraged men to carry water for the women. Still, the men balked.

The Renots have a heart for the people of Congo, so they continue to help by making contacts with people in the United States who may be able to help.

“Churches need to be involved in missions,” Renot said. “Never underestimate the power of the Lord.”