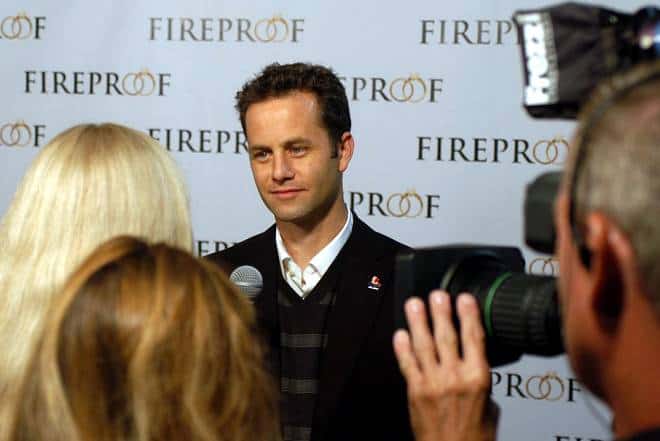 KANSAS CITY (BP) — I’m not sure I could take the slings and arrows Kirk Cameron has had to dodge or endure.

Cameron is famous and talented but add devotion to your Christian walk and there’s a huge target on your back. The star of the sitcom “Growing Pains,” the “Left Behind” apocalyptic series, the breakthrough faith-based drama “Fireproof” and the insightful documentary “Monumental” is paying a price for his gifts and resolve.

Although I’d already interviewed Cameron three times, during a recent phone chat concerning his newest theatrical release, “Unstoppable,” I believe I got to know the man, not just a filmmaker pushing a new project.

“This is the most personal project I’ve ever made regarding my faith,” he states on the trailer for Unstoppable, a riveting documentary dealing with the age-old question, “Why does God allow bad things to happen?”

During the documentary’s publicity campaign, Cameron ran into a snag one can hardly imagine in America.

Unstoppable made headlines the week tickets went on sale when two major sites labeled the film’s website and video link as “spam” or “unsafe.” Facebook seemed antagonistic toward either the subject of where God is in our lives or the man presenting the question. It wasn’t until fan support became somewhat of an uproar that the social media outlet backed off. But during that time, foes of Cameron’s message did their best to belittle him.

With Unstoppable, Cameron once again focuses on humanistic questions that can only be answered from a spiritual perspective. In this thoughtful, heartfelt documentary, he addresses the subject of God seemingly permitting bad things to happen. Having been stirred by the film’s conclusion, and knowing the frustration he had just gone through with Facebook, I read the following paragraph from my review to the filmmaker.

“’Unstoppable’ is the most riveting and inspiring documentary I’ve seen in years from a technical, artistic and spiritual perspective. For me, it was 60 minutes of passionate examination that asserts we are more than mental and physical beings, and that our Creator is with us through the good and the bad: ‘… in all things God works for the good of those who love him, who have been called according to his purpose’ (Romans 8:28).”

“Wow, that’s like water to a thirsty man,” he said.

The death of a close friend’s son sparked the actor/producer to take a spiritual journey through Scripture. Aided by dramatized Bible parables that reflect the same sufferings we face today, Cameron takes his scholarly sojourn, analyzing such questions as: Do things happen by chance or do they purposely serve to develop our nature? And through all our suffering, where is God?

I surmised from the film that Cameron doesn’t believe the details of life are governed merely by happenstance.

“Oh, no,” Cameron said. “We have a God who is not surprised by one thing that happens in the universe. God is a God of purpose. That’s made clear in Romans 8:28. And for those who don’t love Him, they are still used for God’s purposes. One way or the other, you’re in God’s design. You might be the hero or the villain, but you’re going to serve a role in God’s plan.”

What’s the main point he hopes audiences will take away from the film, I asked.

“The question of where is God in tragedy is a universal one,” Cameron answered. “I want people to come out of this movie not only knowing that God is there in the midst of our sorrow, but that He understands how we feel. He gets our doubts and our fears. And He is doing something inside us that will turn out for our good and His glory.”

I was reminded by the film of the need for Bible study in order to communicate these truths to a conflicted and confused world. Want to counter the influence of the secular culture? Want to be able to discuss spiritual matters? Want peace and spiritual strength through difficult times? The film makes it clear that as we delve into the Scriptures we find true “apps” dealing with life’s adventures, joys and sorrows.

The target just got bigger on Mr. Cameron’s back. And on any of those who wish to glorify God, strengthen the body of Christ, and witness to those searching for the answers to the film’s questions. Fortunately, the heavenly hosts are there to protect and deflect.

Unstoppable will be broadcast to 700 theaters nationwide from Liberty University in Lynchburg, Va., on Sept. 24 at 8 p.m. Eastern/7 p.m. Central and tape delayed at 7 MT/8 PT. For theater locations go to www.unstoppablethemovie.com.