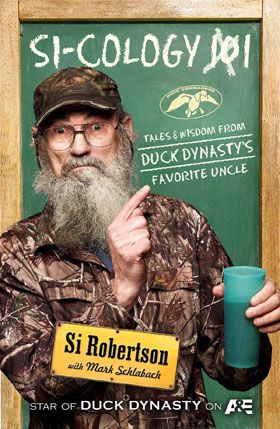 NASHVILLE, Tenn. – Viewers and ducks have a hard time resisting the call of the Robertson family. Duck Dynasty, the hit A&E television show, returns with season four in mid-August. But before that, Si Robertson, one of the show’s stars, opened up to LifeWay Christian Resources about his faith and the reason he and the rest of the Robertsons have found success.

“Uncle Si,” as viewers know him, has a propensity for stretching the truth during his stories on the reality TV show. However, when he recently sat down with LifeWay for two exclusive video interviews, he was serious about what Christ can do—as serious as he can be.

“God has taken four guys that look like five miles of muddy road and made them famous in the TV world.”

In preparation for the release of his new book Si-cology 1: Tales and Wisdom from Duck Dynasty’s Favorite Uncle, Robertson attributes the success of their business and TV show to God. “(People) ask us all the time, ‘How did you become so successful? That would be one answer: The Almighty is the one who has made this a success.”

The show, following the exploits of the Robertson family and their duck call manufacturing operation in Louisiana, has been a blockbuster for A&E. The season finale in April drew a record 9.6 million viewers. In the most coveted demographic of 18- to 29- year-olds, they topped every show on cable and broadcast.

While Si Robertson has experienced God in his success, he also sees God as the one who is there during difficult moments. “I wonder when people run into bad times, when they go to the doctor and they find out, ‘I’m dying of cancer,’ and they don’t believe in God, who do they turn to?” he asked.

“We are all mortal. We are all going in that grave,” he continued in the first of two short video interviews to be released at LifeWay.com. “There ain’t but one way you gonna beat it.”

For him, above all the success and fame, the Gospel is the most important thing in his life. “Like Phil always tells them, ‘If you’ve got something to offer me better than I just shared with you, I’m all ears,’” Robertson said. “[Jesus] beat the grave and He promises you that since He beat it, if you believe in Him, He’ll make you beat it.”

In the second two-minute video to be released next week, Robertson gives his own apologetic for believing in the resurrection of Christ – spring. “In the winter, things are dead and dull, but then there is an explosion of life,” he told LifeWay. “That’s what He promises people who believe in His Son. That’s what all the Robertson’s are banking on.”

More information about the interviews and Robertson’s upcoming book is available at LifeWay.com/SiCology.

A new season of Duck Dynasty begine Aug. 14 on A&E.