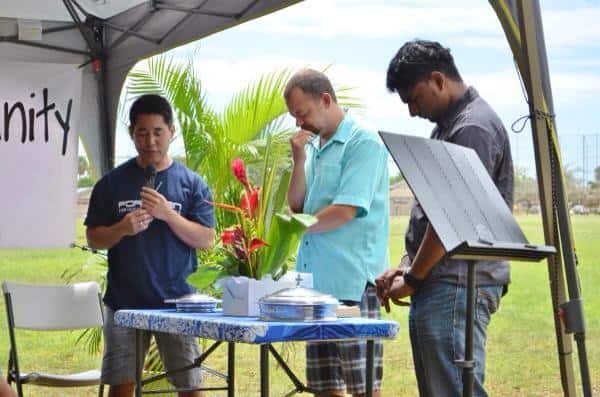 Missouri native Aaron Davis has pastored church-plant Aloha Community Church, on Ewa Beach on Oahu island in Hawaii since July, 2012, with wife Samantha, son Caleb, 10, and foster son, Kerry, 2. The initial church plant was funded, in part, by Cooperative Program gifts from the Missouri Baptist Convention (MBC) and Davis received his church planting assessment and training from the MBC through Second Baptist, Springfield, his hometown church.

They first came to Hawaii eight years ago to visit Samantha’s parents, then temporary residents.

“It wasn’t a good time to take a vacation. I had never been much for the beach. A trip to Hawaii did not sound like much fun. When we got here, I felt more at home than I ever had anywhere. By the end of the week I felt God was calling me to Hawaii,” Davis said.

“It became an inside joke between my wife and I. We talked about how maybe someday, when we retire, we could do ministry in Hawaii. The idea of actually serving in Hawaii just sounded too crazy, It is just too far, too expensive, and too different.”

“A few years ago, God began calling us to church planting. We prayed earnestly to determine where to go. The answer kept coming back ‘Hawaii.’ We talked this over with other people who kept affirming this seemingly crazy idea.”

It’s not all utopia.

“To thrive in Hawaii, one must embrace the culture and it is a daily challenge to learn what we need to know,” Davis said.

For example, the Davises provided pulled pork for a little league baseball game – rather than ice cream. None of the 40 guests, except the Davises, ever heard of pulled pork.

A contrast to Hawaii’s God-made beauty is darkness from idolatry and much mental illness. Suicides are common. Less than three percent of the population is involved in an evangelical church. Oahu is 600 square miles, and people can easily drive it all. The lack of a get-away place brings isolation and feelings of depression to some.

“This darkness presents challenges we cannot imagine,” Davis said. “If someone loses their job, then loses their home because they have no money, they likely don’t have enough for a plane ticket to the mainland to go to family or find affordable housing and more employment options.”

“Honolulu has been rated as the worst traffic in the country. My neighbors leave to go to work at 4:30 a.m. to beat the traffic.”

Aloha Community Church meets in three weekly home groups for a meal or dessert and Bible stories. A group worship of music and a message is the last Sunday of the month at Ewa Beach Park, followed by a potluck meal.

“We focused on evangelism and prayerwalked neighborhoods Pastor Davis set up. We helped support a house group with a barbeque. We invited them to the cookout. Three folks from the neighborhood came by and we built some relationships,” Cox said.

Cox said Hawaii’s beauty didn’t distract from the work, because his team had done mission work in other places.

“Pastor Davis set up a schedule to do what was needed. He included a few days of free time,” Cox said. “People joke about Hawaiian missions ‘suffering for Jesus’ but there is a great need there. The world is at their door. Even in paradise, sinners need to be saved.”

“I want Missouri Baptists to know here’s one young man from the state planting churches in places without a lot of gospel presence. They aren’t getting waves of new members, but by one person at a time they are building relationships. I want to raise awareness and support him however I can,” Cox said.

“The location might be a distraction to a younger, immature person. We do a good job of prepping people before we go to focus on the mission work,” Blubaugh said.

“You almost have to treat it like a foreign mission trip. Honolulu is 2,500 miles from Los Angeles. It’s considerably expensive with food and lodging. College students (on Hawaiian mission trips) have to plan a year in advance. Everything but coffee, pineapple, and macedamia nuts has to be boated in,” Blubaugh said.

“Our vision is to plant a church on each Hawaiian island. We want to work ourselves out of a job. Church planting in Hawaii is not for the faint of heart. The Hawaiian Pacific Baptist Assocaition logistically has their hands full covering the Hawaiian Islands, Guam, South Korea and Japan with 145 churches,” Blubuagh said.