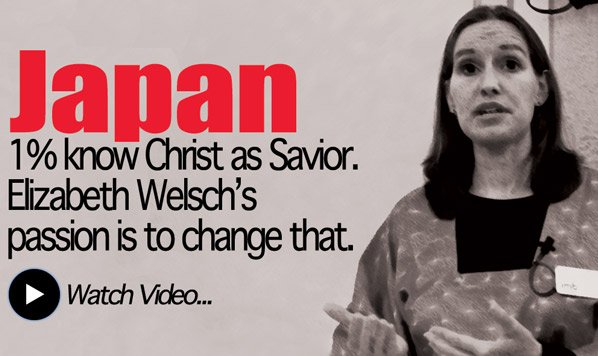 At the close of World War II, Gen. Douglas MacArthur appealed to Western Christians to mobilize 10,000 missionaries to Japan, which he described as a “spiritual vacuum.”

The Lord used MacArthur’s appeal to awaken hearts in America to the spiritual condition of this small, densely populated nation. Today, Southern Baptist missionaries like Missouri’s Liz Welsch devote their lives to sharing the love of Christ with people steeped in Shinto, Buddhism and other Eastern religions.

For Welsch, an International Mission Board (IMB) pioneer church planter, it is a labor of love – a labor she embraces full-time, thanks to the support of Southern Baptists through the Cooperative Program.

“Unlike any other mission-sending organization in the world, Southern Baptists don’t just get missionaries to the field – they keep us on the field,” says Welsch. “As a result, we’re able to remain focused on the task at hand.”

Gospel advancement in Japan has been slow and difficult. Today, less than 1 percent of Japan’s population claims any Christian affiliation, with even fewer embracing evangelical Christianity. The nation instead adheres to a syncretistic conglomeration of historic Shinto and Buddhism, often with a thin layer of whatever they consider beneficial of other world religions, according to Welsch.

As a young girl, Welsch came to know Christ and was baptized at First Baptist Church of St. James. During the early years of her spiritual formation, God brought a sequence of missional influences into her life – a pastor fresh from the mission field in South America, Mission Friends and Girls in Action leaders, as well as leaders of the Missouri Baptist Convention’s Youth Development Week.

God was continually prodding her with information about the nations and their need for Christ. “At that time, I did not see myself as the missionary-type, or living the life they described and seemed to love so much,” she recalls. “I had no desire or interest in going overseas for the purpose of missions. I had never even met anyone from a different country.”

Rather than Welsch traveling overseas for her first cross-cultural encounter, God brought the nations to her during her college days at Purdue University. She began to realize that many of the international students she was in relationship with came from countries where it was dangerous to be a Christian or to tell others about Christ. Prodding questions began to haunt her: How would they hear the gospel in their own countries? What about those who never studied abroad nor had a chance to meet Christians? Who would tell them about Jesus?

God interrupted her graduate studies in 2004 with the opportunity to serve as a summer missionary in Thailand, her first international trip. “This was an incarnational moment for me,” she says. “Instead of waiting for the lost to come to me, I was for the first time, intentionally, going to the lost.”

It was during those strenuous but vital weeks that Welsch sensed God inviting her to make a “career shift” from being a professor in an academic setting to that of a gospel bearer to the nations. “It was an eye-opening experience for a small-town Missouri girl,” she says. “Though I did not yet know the details of where I would go or when, I knew God was calling. I told Him if He would let me share the gospel with people overseas, I would go.”

After returning to the States, she worked through the IMB to go back to the mission field as a “journeyman” upon graduation. “The process of going seemed to take a long time, but God was doing things in my heart to prepare me,” she says. “I was practicing in America what He wanted me to do in Asia.”

Welsch has served for the past seven years as a pioneer church planter in Osaka. She has transitioned from journeyman status to career missionary.

“I want Missouri Baptists to know and understand that every dollar they drop into the offering plate of their church is making a difference in Japan,” she says. “We are coming upon a wave, not yet a Great Awakening, but greater openness to gospel conversations. It is just a matter of time as we patiently sow seeds of the gospel. Thank you for your faithful giving!”

*You can learn more about the Cooperative Program at mobaptist.org/cp.