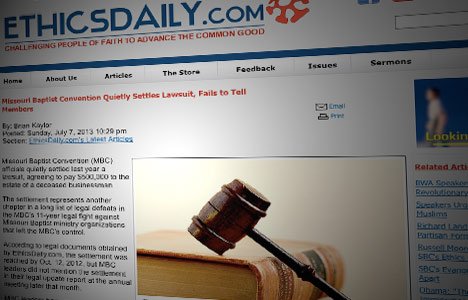 A story July 7 in EthicsDaily.com misrepresented numerous facts and maligned the motives of Missouri Baptist Convention leaders in the legal case involving Windermere Baptist Conference Center and the MBC.

The story, written by Brian Kaylor, asserted that MBC leaders had offered and paid a secret settlement to one of the defendants in the Camden County case, and then concealed it.

In truth, no MBC official has offered or paid any settlement in the Camden County case.

In truth, no MBC official has offered or paid any settlement in the Camden County case, and no MBC funds have ever been spent on settlements involving the WBCC case, according to Rob Phillips, communications director for the MBC.

Last year, an insurance company decided unilaterally to make a settlement payment to a deceased developer’s probate and bankruptcy estates. The estates dropped counterclaims against the convention and others.  MBC leaders disagreed with the settlement payment, but had no control over it under the terms of the policy.

The insurance company refused to explain to the MBC Executive Board why it wanted to settle, but denied that the decision was affected by the fact that the former CEO of the insurance company had, after retirement, been a board member for Windermere Baptist Conference Center.

In addition, the writer failed to clearly note his family and business ties to the case. Litigant James L. Hill is executive director of Churchnet, which employs Kaylor and another member of his family. Hill’s brother, Jerry, is the current CEO of Windermere.

MBC officials and attorneys report that any funds spent in efforts to restore the conference center to its rightful owners — Missouri Baptists — have been at the approval of convention messengers at the MBC’s annual meetings.

Missouri Baptists would welcome settlement and the return of Windermere to the MBC, said Phillips. However, the WBCC refuses to engage in serious settlement talks involving the parties and their attorneys.

In fact, the entire litigation process has been an effort by the WBCC to prevent the case from being heard by a judge or jury. A decision could be reached very quickly if the WBCC would allow the matter to be decided.

“Missouri Baptists authorized litigation as a last resort, and we continue to pursue the return of Windermere at their request,” he said.