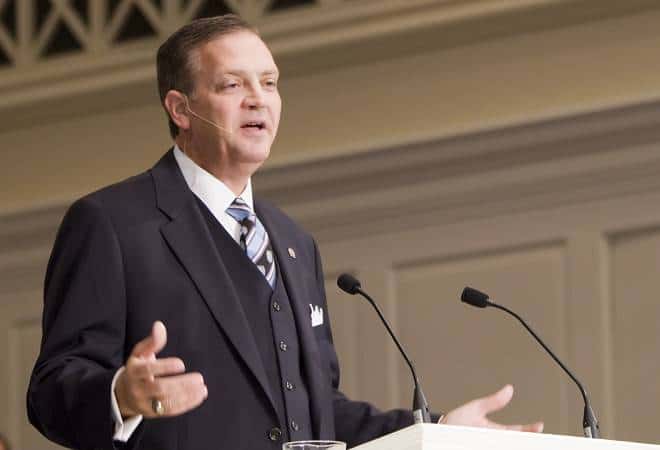 LOUISVILLE, Ky. (BP) – On the last day of its term, the U.S. Supreme Court ruled today on two same-sex marriage cases. Both are important cases, and both will go far in redefining the most basic institution of human civilization.

The court knew it was making history. A majority of the justices clearly intended to make history, and future generations will indeed remember this day. But for what?

In the first decision handed down today, the Supreme Court found that the Defense of Marriage Act (DOMA), passed overwhelmingly by Congress and signed into law by President Clinton in 1996, is unconstitutional.

In the Proposition 8 case, the court’s majority held that the plaintiffs in the case, representing the people of California, lacked legal standing to appeal the lower court’s decisions that found Proposition 8 to be unconstitutional.

The avowed purpose and practical effect of the law here in question are to impose a disadvantage, a separate status, and so a stigma upon all who enter into same-sex marriages made lawful by the unquestioned authority of the states.

In 2008, a majority of voters in California passed a constitutional amendment that defined marriage in that state as the union of a man and a woman, effectively overturning a California Supreme Court ruling that had legalized same-sex marriage.

The U.S. Supreme Court’s ruling in that case today means that the decision of the Federal District Court stands, presumably meaning that same-sex marriage will be legal again in California. This is presumably the case, but not necessarily, because of disputed provisions in California law. Courts in that state will have to sort out those issues.

Of the two decisions handed down today, the DOMA decision is, by far, the most important and wide-reaching.

In the court’s majority opinion, written by Justice Anthony Kennedy, the court has ruled that Congress was motivated by a specific moral animus against homosexual marriage and homosexual citizens when it passed DOMA. As such, the court ruled that DOMA is unconstitutional.

It is virtually impossible to exaggerate the future impact of the DOMA decision, but it is not yet a new Roe v. Wade. Instead, it sets up a future legal challenge from any citizen in any state that does not have legal same-sex marriage. The court’s decision in that future case, surely not long in our future, will be the new Roe v. Wade – a sweeping decision that would create a new “right” that would mean the coast-to-coast legalization of same-sex marriage.

Today’s decisions do not take us there, but they take us to the precipice of that sweeping decision. That is especially true of the DOMA case.

Striking at the heart of DOMA, Justice Kennedy wrote: “The history of DOMA’s enactment and its own text demonstrate that interference with the equal dignity of same-sex marriages, a dignity conferred by the States in the exercise of their sovereign power, was more than an incidental effect of the federal statute. It was its essence.”

As evidence of this judgment, Kennedy cited a document from the House of Representatives in 1996. That statement proposed that DOMA expressed “both moral disapproval of homosexuality, and a moral conviction that heterosexuality better comports with traditional (especially Judeo-Christian) morality.” That document went on to state that DOMA would protect the government’s “interest in protecting the traditional moral teachings reflected in heterosexual-only marriage laws.”

In the view of five justices, that meant the death of DOMA. They ruled that the only reason that Congress passed DOMA in 1996 was because it wanted to single out same-sex couples to be denied access to marriage, and it did so on moral terms.

As Kennedy argued in his majority opinion, “The avowed purpose and practical effect of the law here in question are to impose a disadvantage, a separate status, and so a stigma upon all who enter into same-sex marriages made lawful by the unquestioned authority of the states.” In doing so, he argued, the Congress had passed a law that “violates the due process and equal protection principles applicable to the Federal Government.”

Nevertheless, even as Justice Kennedy castigated Congress (and presumably former President Clinton) for making moral judgments, he could not resist moral judgments of his own. He wrote of our society’s “evolving understanding of the meaning of equality” and declared that the states have the right to confer on same-sex marriages “the equal dignity” of a marriage between a man and a woman.

While the immediate effects of the striking down of DOMA’s federal definition of marriage are not specifically clear, it does mean that the federal government will now be required to recognize any same-sex union declared to be legal in any state, extending full recognition and extending all federal marriage benefits to that same-sex marriage.

The Obama administration will have to make a myriad of decisions about how this is to be done. Interestingly, this will put President Obama, who last year “evolved” into full support for legal same-sex marriage, on the hot seat once again.

He acknowledged that this moral judgment is both venerable and deeply rooted in the moral traditions of Western civilization, but he condemned such laws and, writing for the majority, struck them down. He employed the very same logic today in striking down DOMA.

Back in 2003, Justice Antonin Scalia issued a scathing dissent to Justice Kennedy’s majority opinion: “Today’s opinion dismantles the structure of constitutional law that has permitted a distinction to be made between heterosexual and homosexual unions, insofar as a formal recognition in marriage is concerned. If moral disapprobation of homosexual conduct is ‘no legitimate state interest’ for purposes of proscribing that conduct … what justification could there possibly be for denying the benefits of marriage to homosexual couples?”

Justice Kennedy insisted in 2003 that the Lawrence decision did not involve homosexual marriage and did not imply any necessary recognition of same-sex unions. In response, Scalia retorted: “This case ‘does not involve’ the issue of same-sex marriage only if one entertains the belief that principle and logic have nothing to do with the decisions of this Court.” He concluded: “Many will hope that, as this Court comfortingly assures us, this is so.”

In an equally scathing dissent handed down in the DOMA case today, Scalia called the decision “jaw-dropping.” He castigated the court’s majority for usurping the democratic process and for condemning all opposition to same-sex unions as “irrational and hateful.”

Even though the court did not rule today that all states must legally recognize and allow for same-sex marriages, the handwriting is on the wall. Justice Kennedy’s majority opinion implicitly invites any citizen who resides in a state that does not allow for same-sex marriage to claim that his or her constitutional rights are violated on the basis of the court’s opinion handed down today. You can count on a challenge of this form arising in short order.

As Justice Scalia noted in his dissent today, “As far as this Court is concerned, no one should be fooled; it is just a matter of listening and waiting for the other shoe.”

The court’s majority did not want to pay the political price that a decision as immediately sweeping as Roe v. Wade would have cost. Instead, the majority decided to send a clear signal that such a case will now be well-received. It struck down DOMA by employing a logic that, as Scalia noted, cannot stop with the striking down of DOMA. It can only stop with the full legalization of same-sex marriage in all 50 states by judicial fiat.

But wait, for there are more shoes to drop. In his opinion today, remember that Justice Kennedy wrote these crucial words: “The history of DOMA’s enactment and its own text demonstrate that interference with the equal dignity of same-sex marriages, a dignity conferred by the States in the exercise of their sovereign power, was more than an incidental effect of the federal statute. It was its essence.”

The Christian Church and Marriage

The Christian church does not ask the U.S. Supreme Court, or any other human court, what marriage is. Marriage is a pre-political institution defined by our Creator – for His glory and for human flourishing.

Today’s decisions will create serious religious liberty challenges for all churches, Christian institutions and Christian citizens in this nation. But the greatest impact of these decisions is the further marginalization and subversion of marriage. The destruction of marriage did not start recently, and it did not start with same-sex marriage, but its effects will be devastating.

Christians will have to think hard – and fast – about these issues and our proper response. We will have to learn an entire new set of missional skills as we seek to remain faithful to Christ in this fast-changing culture.

And, as warned by Justice Scalia, we do so knowing that we are waiting for the other shoes to drop.