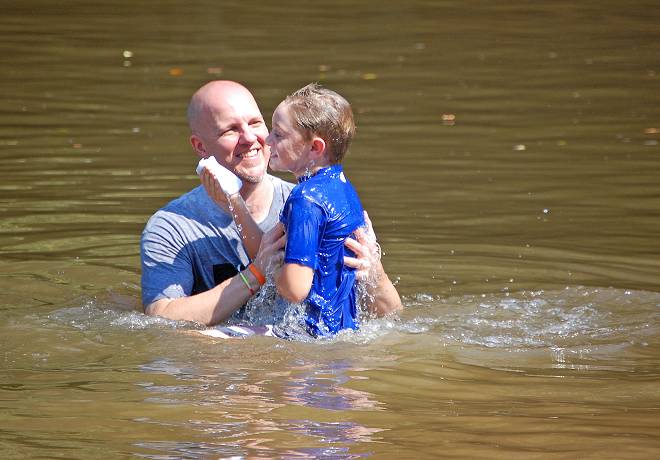 JOPLIN – Baptismal waters have been stirring in Missouri.

The 1,909 churches that make up the Missouri Baptist Convention (MBC) recorded 10,364 baptisms last year, according to information provided by churches in the Annual Church Profile (ACP). Though only 83.3 percent of churches submitted an ACP a report, it is the most accurate gauge of church activities available. Though 2012’s 10,364 baptisms is slightly higher than the previous two years, it still reflects a downward trend of baptisms in recent years. From 1987 to 2006, Missouri’s churches record between 12,000 and 17,000 baptisms each year. Still, Mark Snowden, MBC evangelism/discipleship strategist, said each one is an answer to prayer and there is plenty to celebrate.

“The 25 year baptism trend line is negative,” he said. “My fear is that we miss out on the bigger picture to address widespread lostness across Missouri. According to 2010 census reports, more than three million Missourians (50.7 percent) are unclaimed by any faith group in our state. So, we celebrate each and every baptism, but we keep striving to make Christ known.”
Snowden said baptism is only one step in obedience that is best followed up in a local church.

“I would challenge every pastor and church leader, even if they had only one baptism all year to invest in that new believer to become a disciple-maker,” he said. “Don’t just have a luncheon and introduce the church leaders. Don’t just give them a spiritual gifts inventory to fill out and pass them off to a committee to take on a role in the church. Don’t just plop them in a Sunday School class and hand them a quarterly. Most new believers – kids to seniors – know more lost people than those who have been saved for a few years. Go with them to introduce Christ to everyone they know. We keep praying for God to send workers to the harvest in alignment with Luke 10:2.”

Brad Graves is pastor of Calvary Baptist in Joplin. They saw 145, the most of churches averging 201-300 in Sunday School. It’s a surprisingly high percentage for a church of that size, a statistic Graves says came out of times of trial.
“We have seen a lot of baptisms within our adults as a spirit of revival has swept across our church. We were broken as a church between pastors and with the tornado. No revival comes without a brokenness and hunger for God to make us over. We can see some patterns. We have seen a lot of students baptized after we brought on a new student pastor. We also made contacts within the school system, conducted sports camps, hired a family pastor, and constantly emphasized the need to be active witnesses through Reach, our visitation program. Baptism rallies are a huge part of our dynamic here at Calvary.”

First Baptist Church, De Soto reported the most baptisms for churches averaging 301-400 each week, with 40. First Baptist’s pastor, Jeremy Muniz, said his church gives God all the glory.
“It’s the Holy Spirit at work,” he said. “We have had a consistent perspective from the pulpit so that every message is intentionally gospel-centered and grace-centered. I consider baptism to be the best sermon of the day! It presents a testimony of salvation that is better than any sermon I can preach.”

Richie Rhea, pastor of First Baptist, Troy saw 56 baptisms, the most of churches averaging 401-500 in Sunday school. “We put an emphasis on baptism,” he said. “We set a date about two months out. We announce it weekly and provide a Bible study we’ve written on baptism which we ask folks to read. Baptism is such a great teaching symbol. It teaches us the gospel – the death, burial and resurrection of Christ. It gives us a way to express our faith in Christ. It also reminds us how to live the life Christ has called us to live – we have died with Christ – we’ve been raised with Christ – we now live a new life through Jesus. I believe that if every church would set a date on which they plan to baptize – teach it – plan for it – make a big deal out of it – the Lord would bless with folks coming out of faith in Christ to be baptized.”