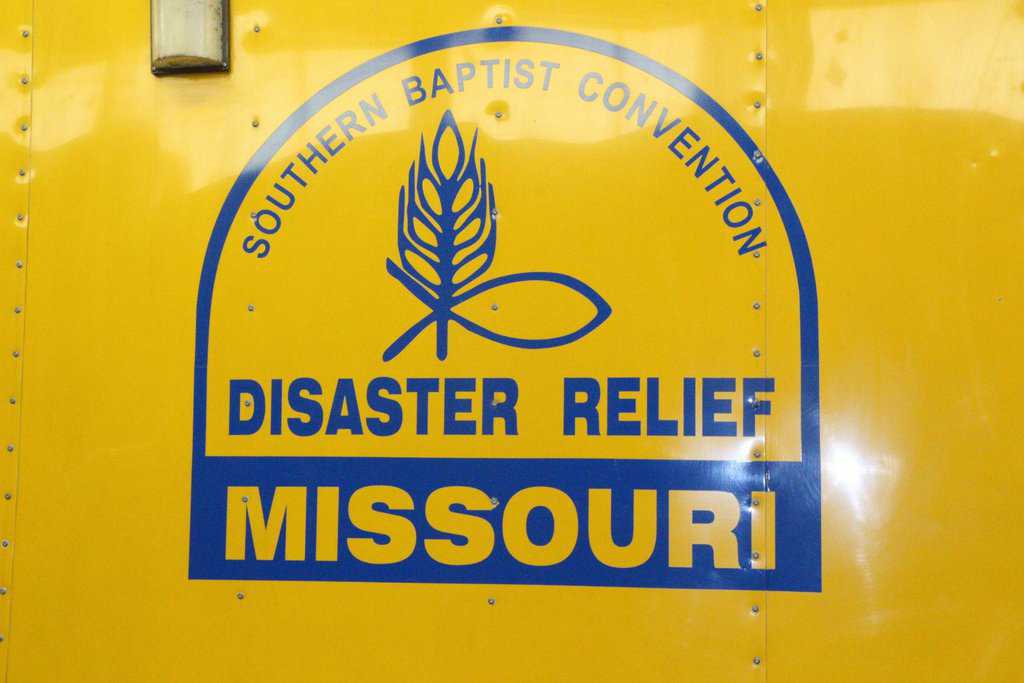 HANNIBAL – More than 65 Missouri Baptist Disaster Relief volunteers helped clean up trees after a powerful storm ripped through Hannibal May 20.
Though it didn’t have the scope or deadly results of the tornado the same day in Moore, Okla., the storm left thousands of trees in need of partial or total removal throughout Hannibal and damaged buildings on the Hannibal-LaGrange campus.

By the next day, there were 72 work orders of trees that needed attention. That number had jumped to more than 160 by May 24.

There were no fatalities or injuries reported, and despite the massive impact area, there was little mention of the storm in the news, save local media.

Every disaster presents unique situations, and the challenges in Hannibal were multiplied.

“A power outage affected the operation (through Hannibal). It’s a widespread impact and we found more damage than we were initially aware of, and there were more people involved. There was no real storm path, just a wide impacted area,” said Randy Ewart, who served the first week as incident commander.

“There’s a dense population, there are a lot of older trees (affected), there are lower income people, and the terrain (hills) and access,” Ewart said of the problems.
Hannibal/Marion County Emergency Manager John Hark said the storm had 100-mile-an-hour sustained winds with gusts of 100 and an F1 tornado.

Hark said the power outage was a big problem as people lost “a great deal of food” (in refrigerators and freezers). The second biggest problem for Hannibal officials was what to do with the cut brush and trees.

Hark recognized it was “by the grace of God the storm wasn’t worse than it was” – i.e. no injuries or fatalities.

Complicating the response for Hannibal, according to Dwain Carter, head of the Missouri Disaster Relief, were storm damage events in North Kansas City, St. Joseph, Ava, Carthage, and Sedalia from the same storm system. However, the Hannibal operation far surpassed the damage in the other areas.

While there have been other multiple-location disaster responses, Carter said this was the most spread out for Missouri Baptists since the 2007 ice storm.

Hannibal is in the Bethel Baptist Association. Bethel’s Director of Missions Al Groner said the 2008 Bear Creek flooding was a similarly big problem, the exception being the flooding was more localized and the most recent wind storm was over the entire city of 17,606 population.

“I was so shocked it was so wide-spread,” Groner said before his chainsaw unit went out May 24. “At first I thought it was local around Hannibal-LaGrange. With Bear Creek, we didn’t have to provide as much support for the city. My team has done 30 jobs just for the board of public works. They (city) were not able to keep up with the calls.”

Groner said some of the Bethel responders had to leave Disaster Relief to help church members with needs.

“What a blessing it is to have Missouri Disaster Relief to provide mass care and chain saws,” Groner said.

“It’s an amazing unifying act of compassion. It’s a very diverse group of Missouri Baptists serving as one seeking to meet the needs of Hannibal,” said Wesley Hammond, pastor of First Baptist Church in Paris, and president of the Missouri Baptist Convention.

“I believe the most effective evangelism tool is a disaster relief-like ministry,” he said. “Jesus always tried to reach in a practical way first to build bridges. That’s what Missouri Baptists should do.”

The storm tore off a portion of the roof of Hannibal-LaGrange University’s science building and shut down the campus while crews worked to restore power. The building suffered considerable water damage when the roof was lost. The Roland Fine Arts Center, Prince House, Carroll Missions Center and a few dorms also received damage.

There were minimal people on campus, since students took their last finals May 1.

“We are grateful that there was no loss of life,” said HLGU president, Anthony Allen. “There has already been an outpouring of support. I know God will use this event to help us share the love of Christ and extend a helping hand in our community.”