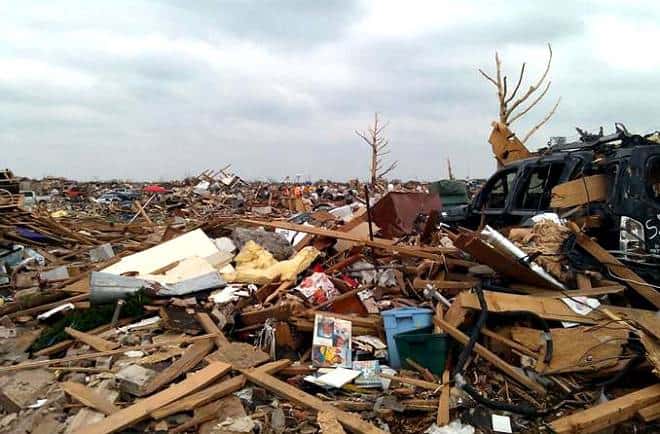 MOORE, Okla. (BP) – Gary Hunley had seen it all before. As he surveyed the damage left behind from last Monday’s EF5 tornado in Moore, Okla., he saw an all-too-familiar scene of overturned cars, metal signposts bent to the ground and houses reduced to rubble.

Almost two years to the day before the historic Moore tornado, Hunley’s home was destroyed by an equally historic tornado in Joplin, which killed 158 people. Since then Hunley, the leader on his Spring River Baptist Association Disaster Relief team, has participated in numerous Southern Baptist Disaster Relief responses. Yet because of the amount of damage in Moore, the latest assignment has brought back a variety of memories.

“I understand it,” Hunley said. “I saw it yesterday for the first time. It was like Joplin – the scene, the smell, the look on people’s faces. Some are trying to be uplifting and act like everything is okay. They’re hiding it though; I can see it on their face. I feel so sorry for them.”

Hunley and his team of three Missouri Baptists were among hundreds of Southern Baptist Disaster Relief (SBDR) volunteers serving in Moore and Shawnee, Okla., following recent tornadoes, including the May 19 Shawnee twister that killed two. Southern Baptist volunteers have ministered to the practical and spiritual needs of Oklahoma residents by removing fallen trees and other debris, searching for personal items, putting tarps on roofs and counseling survivors and performing other tasks. Volunteers have come from the Southern Baptists of Texas, the Texas Baptist Men and state conventions in Arkansas, Iowa, Kansas-Nebraska, Louisiana, Missouri, North Carolina and Oklahoma.

Southern Baptists had logged a total of 972 volunteer days, prepared more than 30,000 meals, presented the gospel 47 times and distributed 278 Bibles through May 25.

Shad Schlueter, a member of the disaster relief chapter of First Baptist Church of Lockney, Texas, described his work as his “witness to people.”

On May 25 Hunley and his team helped a young Moore couple find irreplaceable memorabilia that they’d given up for lost, having thought they’d already found everything left behind.

But thanks to the Missouri team, homeowner Jill Thompkins found a tub of photos yet undamaged, featuring her with her dad.

“I’m so grateful,” Thompkins said. “It’s so amazing how people have come from all over to help us. I’m so thankful because no one can do this kind of stuff by themselves.”

The Missouri team members, who all live near Joplin, leaned on their personal experiences to minister in Moore. Floyd Morris of First Baptist Church, Diamond, got an opportunity to share his faith in Christ with a renter who lived across the street from Thompkins. The renter had no insurance, wanted no help and expressed bitterness to God as he cleaned up the property.

“I told him that the anger was a part of the grieving process,” Morris said. “It’s going to get better, so much better.”

Though Morris had been trained for disaster relief work for some time, he hadn’t been able to go on other trips because of work. He says recently his pastor challenged him: “You don’t just train; you go out [and serve]!”

“I told [my boss] that I don’t want to quit you, but this is a God-thing,” Morris said. “I don’t question my Lord, and He is telling me to go. This hurts. You come in here and see this and it’s Joplin all over again.”

North American Mission Board coordinates and manages Southern Baptist responses to major disasters through partnerships with 42 state Baptist conventions, most of which have their own state disaster relief programs.

Southern Baptists have 82,000 trained volunteers and chaplains and 1,550 mobile units for feeding, chainsaw, mud-out, command, communication, childcare, shower, laundry, water purification, repair/rebuild and power generation. SBDR is one of the three largest mobilizers of trained disaster relief volunteers in the United States, along with the American Red Cross and The Salvation Army.