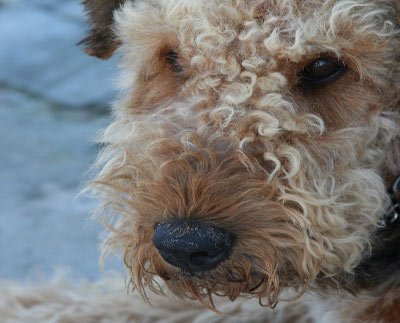 CONWAY – If you would have slipped into the worship service Crossing Over SBC held in the Conway Community Center in mid-March as a visitor, you might have told friends afterward that the church had gone to the dogs.

Technically, you would have been correct.

Sherry Reeves attended the church for the first time that day, and she brought her Yorkshire Terrier, named Rocky, because she didn’t want to leave him home. But there’s more to the story – so much more.

Lynndon Welch, a Missouri Baptist Convention church planter and pastor, leads the flock of 60 members at Crossing Over in Conway – a town of slightly less than 800 people, located in south-central Missouri.

He and his wife, Tammy, have been taking a 7-year-old neighborhood boy named Lee Reeves to church for the past four years. Lee is the son of Leroy and Sherry Reeves. Lynndon and Tammy became friends with the family after the Reeves moved into the neighborhood.
Leroy was a professing Christian, a Vietnam veteran and former prisoner of war.

Understandably, he didn’t like being around a lot of people, so he didn’t attend church. Tammy had a hard life, one that didn’t include a solid church background. They had no objections, however, when Pastor Welch asked them if he could take Lee to church.

Lee hasn’t made a profession of faith yet, but Pastor Welch says Lee knows Jesus is special and he is in tune with spiritual matters.

“Down deep inside of him, he knows he wants his mom and dad to be in heaven,” Pastor Welch said. “And in the simplicity of what that means to him, that’s what he wants. And he asked us every Sunday, ‘Pray for Mom, and pray for Dad,’ and we did.”

Sadly, Leroy passed away in January, but Pastor Welch didn’t doubt his testimony, so Lee can find comfort in believing his father is in the presence of Jesus right now. But Sherry didn’t have a relationship with the Lord and never expressed an interest in attending church with Lee.

Then, on that morning in mid-March, Pastor Welch called Sherry to see if Lee was going to church. He was stunned by her answer.

“I never will forget that morning when I called her,” Pastor Welch said. “She said, ‘Yeah, he’s going to go, but today I’m going to take him.’”

Welch got emotional, knowing God was at work.

When Sherry and Lee arrived with Rocky, they walked into the community center for worship and were surrounded by a church that has experienced hardship and brokenness, and therefore they know how to love people who are hurting. Pastor Welch says the congregation knows poverty, and divorce, and drug addiction, but it also knows a loving and merciful Jesus.

“This is what the people of Crossing Over do …” Pastor Welch said. “When we as Christians remember what it was like to be lost, then we’ll start telling people about Jesus Christ. And we’ll start loving people and having a passion for those people to come and know our Lord and Savior.”

In that spirit, the congregation didn’t blink an eye when Sherry walked into worship with a dog. Instead, they gathered around her, fawned over Rocky, and welcomed her. Evangelism Director Dairus Dudley found her and Rocky a seat in the front row, while Lee went off to children’s Bible group.

“That morning was the first time I ever preached to a dog,” Pastor Welch said.
Rocky whimpered a little during the service, but was well-behaved.

As Sherry took her seat, she did so with a heavy heart. After she lost her husband, somebody broke into her home and stole her wedding ring, several of Lee’s electronic devices and a substantial amount of cash she happened to have on hand after selling some cattle. She was burdened and her emotions were raw.

As the service began, the Holy Spirit began to draw her. Welch said he could see tears running down her cheeks periodically throughout the service. When he issued the invitation, Sherry, and Rocky, went forward.

“I’m tired of running,” she said to Pastor Welch. “I just want Jesus in my life.”
She prayed to receive Christ right there at the altar.

Members of the church gathered around her and Rocky and celebrated. She was baptized at the church a few weeks later and has since taken on what Pastor Welch calls a new countenance in Christ as she begins to read the Bible and spend time with God’s people.
As for Rocky, he’s made a couple of more appearances at church events and is building quite a fan club.