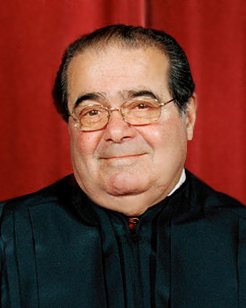 Perhaps the most important question asked in the Supreme Court during the two days of argument on gay marriage was a rhetorical question posed by Associate Justice Antonin Scalia to pro-gay marriage attorney Ted Olson. “When did it become unconstitutional to exclude homosexual couples from marriage?”

Implicit in the question “when did it change” is the question “who changed it?” The answer to those questions exposes the fundamental difference between two competing worldviews in the courtroom, and in the public square, about the nature of law and how judges should interpret it.

In any other case, if a judge asks for a date when the pertinent statute was enacted, or when a particular court precedent was decided, the attorney can shoot back the precise date almost instantly. Experienced appellate advocates know the key facts and the legal authorities in their case better than anyone. But in this case, Olson equivocated. He pretended to answer by asking his own rhetorical questions: “When did it become unconstitutional to prohibit interracial marriages? When did it become unconstitutional to assign children to separate schools.”

But judges get to ask the questions at oral argument, not the lawyers. Justice Scalia responded: “[That’s] an easy question … [A]t the time that the Equal Protection Clause was adopted.” After parrying Olson’s retort, Scalia drove his point home again: “But don’t give me a question to my question. When do you think it became unconstitutional? Has it always been unconstitutional?”

Unable to give a date, Olson played the “evolution” card. That’s the card politicians commonly play to cover their waffling on fundamental moral issues. “There’s no specific date in time,” Olson philosophized. “This is an evolutionary cycle.”

An evolutionary cycle? That phrase might seem relevant in a high school science class, but a first year student at any law school in the land would not expect to get away with such a non-responsive comment, had a constitutional law professor asked him for the date a law was passed. “It evolved” would be an embarrassing non sequitur, which the professor would ungraciously point out.

Statutes, cases, and constitutional amendments all have effective dates. Judges and lawyers know that laws and rules are tied to dates. Enactment dates. Signature dates. Judgment dates. Laws defining marriage as the legal union of one man and one woman have been constitutional for all these years, since the Constitution was adopted, but now attorney Olson tells the Supreme Court that constitutional law has changed and that such traditional marriage laws are now unconstitutional. Justice Scalia rightly asked the simplest question: “When did that happen?”

“It evolved.” It is as if we should believe in “spontaneous generation” in the law library. The Court was busy working on other cases in the courtroom; meanwhile, back in the dusty, musty law library, the Constitution evolved. What used to be lawful became unlawful. What used to be right is now wrong, and what used to be a moral wrong is now a civil right Some wise lawyers and judges have recently seen the light and realized that the Constitution now means that marriage laws which do not affirm homosexual marriage are unconstitutional. They just can’t tell us when this happened. “It just happened. Trust us.”

The Constitution just “evolved?” Who are they trying to kid?

The answer to that question is you, the non-lawyer public. They hope you will believe that they are not just making this stuff up. They hope you will believe that they are advocating for principled decisions based on duly enacted laws. They do not want you to suspect they are trying to change the law to fit their preferences. They know that the American people might not give up their rights of self-government so easily if the people realized that the self-appointed “new ruling class” is a bunch of trial lawyers and unelected federal judges.

This is the competing worldview in the courtroom and in the public square: That the Constitution can mean whatever the judges say it does. They call it a “living document” to justify changing the rules to fit the changing opinions of living politicians. When they decide the political process is too slow to suit them, political leaders simply ask the Supreme Court to declare that a longstanding, traditional policy has recently become unconstitutional. Just don’t ask when it happened or who changed it. Like the little dog Toto pulling back the curtain to expose “Oz, the Great and Terrible,” Justice Scalia’s little question pulls back the curtain on “Olson, the Wise and Learned.” With all his legal brilliance, he cannot tell us the date when the Constitution changed. Because the truth is, the Constitution did not change. It did not evolve. Olson wants the Court to change the Constitution by pretending that the law has already changed and the judges are merely recognizing it.

Scalia is making the point that, if the people want to change the Constitution, elected representatives in both chambers of Congress may propose amendments which three-fourths of the States may ratify. And after changing it, the people can change it back. (The 18th Amendment was later nullified by the 21st Amendment, so there are only 26 amendments effective today.) The power is in the people, not self-appointed legal wizards.

Justice Scalia describes himself as a “textualist.” Textualists “look for meaning in the governing text, ascribe to that text the meaning it has borne from its inception, and reject judicial speculation” about how to rewrite the laws to fit modern preferences. Until the people duly amend the Constitution, the text of the document is where we find its meaning.

The job of judges is to interpret the text and apply it to the facts of individual cases. The text is not a “living document,” adapting to the “living” and “evolving” opinions of modern judges or politicians. Textualists urge the judiciary to rise above politics and produce a government of laws, and not of men.

The Court will announce a decision probably in June 2013. (There will be an effective date!) We’ll see if his fellow justices admit the importance of Justice Scalia’s question, or if they join the game of legal wizardry.