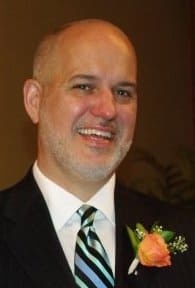 ST. PETERS – For many people, a career that spans decades starts to look like the one they will retire in … or certainly not move far from in another role.

For James Stull, more than 20 years of teaching experience was simply a prelude to a marketing position for a
Christian library.

Last fall Stull—a member at First Baptist Church, Fenton—did not return to the private school where he had taught for 20 years. Instead, he began a role as the development director for The Family Vision library (TheFamilyVision.org) in St. Charles County.

“We’re the only free lending, Christian library in the nation that we know of,” Stull said. “I love this ministry. I think the potential of this ministry becoming a huge influence for the body of Christ is great.”
He has served on the library’s board of directors for 10 years and said that he wasn’t applying for the development job when the board started discussing how to grow the ministry. When they heard his vision and passion, Stull said they said, “You do it.”

Stull said he didn’t have a unique confirming moment of the decision, but sensed so strongly that the library was where God was leading him that he asked his school to be released from his 2012-2013 teaching contract.
“Sometimes we have to move towards where God is leading us,” he said. “I think we see situations in the Scriptures with people who didn’t know why God was having them move or why God was doing certain things in their lives but along the way it becomes obvious to them what God’s perfect will for their life is.”

He doesn’t see his current and former positions—teaching and selling—as very different and believes that through teaching the Lord was equipping him for his new role.

“There’s that aspect of creativity and marketing that goes on every single day in front of the kids,” Stull said. “Trying to get a bunch of sixth-graders attention, a lot of what I did every day was sales work. ‘You want to learn this because this is important.’”

Stull sees his being prepared for the library in other ways as well.

“I’d worked at a nonprofit private school and I’d seen the work that goes into fundraising, into building a donor base,” he said. “I knew some things (the library) could be doing that we weren’t.”

He said Family Vision plans to grow to three locations in three years and five in five years. He feels confident about the future.

“The only thing that should stop us is God,” he said. “We need to listen carefully to make sure we’re doing what God wants us to do.”

The resource center is supported by a foundation and was founded to provide local homeschool families with Christian worldview materials. Stull said that it now sends items from its collection of over 10,000 books, DVDs, CDs, and other materials around the world. It also supports churches without media centers and pastors without the funds to develop their own study libraries.

Family Vision’s materials cover a range of Christian perspectives while sticking closely to Bible principles. The intent is to help equip Christians to meet the needs of people who are physically and spiritually hungry.

“If we go and give them a sandwich and a glass of water and say nothing about the fact that Jesus loves them, then all we’ve done is make them comfortable on their way to hell,” Stull said. “The goal in helping others—in whatever we do—is to tell others about Christ.”

Stull and his wife, Betsy, have four children and have served at First Fenton for over two years where he sings in the adult choir. Both have worked with youth groups and participated in mission trips there. He was previously a bi-vocational music minister at two other churches.